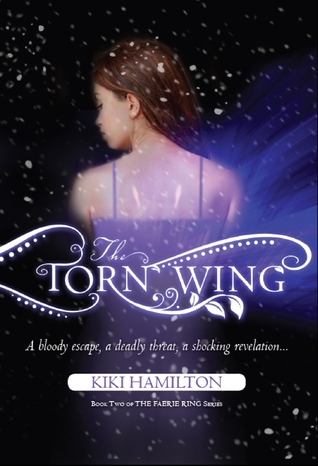 A bloody escape, a deadly threat, a shocking revelation...

As an orphan who stole the Queen's ring - only to find the ring was a reservoir that held a truce between the world of Faerie and the British Court - Tiki’s greatest fear suddenly becomes all too real: the fey have returned to London seeking revenge. As war escalates in the Otherworld, Queen Victoria’s youngest son, Prince Leopold, is attacked. In order to protect her family and those she loves, Tiki needs to know the meaning of an fáinne sí, the birthmark that winds around her wrist. But will she be brave enough to face the truth?

"It took thirty minutes for Tiki and Fiona to walk from Grosvenor Square to Charing Cross railway station. They cut down Saville Row and over to Regent Street, the roads busy with carriages and omnibuses ferrying the masses through the heart of London."--The Torn Wing by Kiki Hamilton

What are some of your favorite books that feature fairies?

Email ThisBlogThis!Share to TwitterShare to FacebookShare to Pinterest
Labels: Kiki Hamilton, The Friday 56, The Torn Wing