Short Stories I Read In October

It’s November twenty-ninth. So it’s time to talk about the short stories, miscellaneous posts, and podcast episodes I read or listened to in October.

The Three Books and What They Tell by Alexandra Manglis (Lightspeed Magazine; Oct. 2022, Issue 149)

The first story I tackled in October was a piece of flash fiction called The Three Books and What They Tell by Alexandra Manglis. This story was beautiful. And, as its title suggests, it’s about three books. I liked what the author did by adding some fantasy elements into the descriptions about the substance of the books, and who their ideal readers are. All-in-all, this was a great story.

The second story I read is called The Skinless Man Counts to Five by Paul Jessup. This was the perfect kind of read for October, because there was something so eerie and horrifying about the events as they unfolded. The first death was a warning. And from there the story spiraled into an apocalyptic nightmare set in space and aboard a generation ship that may or may not be about to fail. The isolation of the setting provided the perfect backdrop, and the lightning quick way the story was told kept me on the edge of my seat. It would be a page-turner, if there were pages to turn.

The First Morning In May by Rebecca Buchanan (Strange Horizons; Issue: 3, October 2022)

The third piece I read in October was some poetry from Strange Horizons. I am a sucker for almost anything that reads like a fairy tale, and The First Morning in May by Rebecca Buchanan fit the bill perfectly. It involved an elf and seven brides, and with the way it played out, I was reminded of certain aspects of the folktale Bluebeard. The writing was lyrical, and it accurately conveyed the inherent darkness within the framework of the poem.

The next and last story I read was The Portal Keeper by Lavie Tidhar. I was interested in this one, because it seemed totally different from the Judge Dee stories. I loved it. The story was written like a daily log from October 1st to the 31st, and each entry showed a scene that was like an overview of the keeper’s day. So the title tells you what it’s about. But I also liked the exploration of the role of “portal keeper”—the loneliness of the job, the routine, but also the need for connection in a situation where encountering the fantastical (and sometimes dangerous) is the norm. There are a few recognizable references here, particularly for stories like Alice’s Adventures in Wonderland as well as Peter Pan.

From around the web…

Andrea: This week I'm listening to Flashdance What a Feeling by the late Irene Cara. RIP

When the Tiger Came Down the Mountain by Nghi Vo 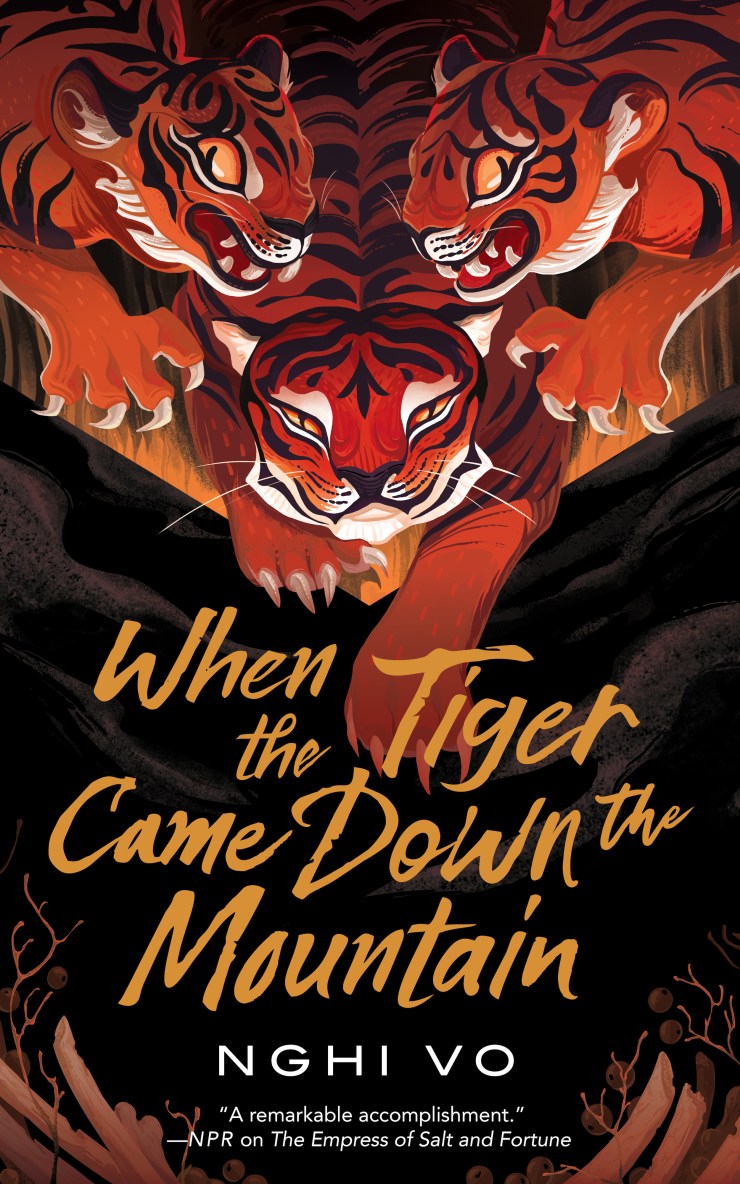 The cleric Chih finds themself and their companions at the mercy of a band of fierce tigers who ache with hunger. To stay alive until the mammoths can save them, Chih must unwind the intricate, layered story of the tiger and her scholar lover—a woman of courage, intelligence, and beauty—and discover how truth can survive becoming history.... Nghi Vo returns to the empire of Ahn and The Singing Hills Cycle in this mesmerizing, lush standalone follow-up to The Empress of Salt and Fortune...

I enjoyed The Empress of Salt and Fortune so much, and I was eager to dive into its sequel, When the Tiger Came Down the Mountain. I also already had a copy of it, because it was a Tor.com eBook Club title a while ago, so there was basically no delay between when I finished the first and started the next.

When the Tiger Came Down the Mountain was just as engrossing and excellent as its predecessor. I really enjoy what Nghi Vo does with an embedded narrative, though the dynamics were shifted by the stark change in setting and the noticeable absence of Almost Brilliant. (I missed the neixin’s witty remarks!) But I didn’t mind it. The story was interesting not only because Chih doing most of the storytelling, but also for the addition of new characters, mammoths, and how great the story within the story was.

The tigers, in particular were fascinating. They were true to their nature and sufficiently terrifying in something of an antagonistic role—but also they were the catalyst that propelled the story in the direction it ultimately took. I genuinely enjoyed how Vo characterized them.

Overall, When the Tiger Came Down the Mountain was the perfect weekend read, and I look forward to eventually reading the third book in the series.

The Empress of Salt and Fortune by Nghi Vo

A young royal from the far north is sent south for a political marriage in an empire reminiscent of imperial China. Her brothers are dead, her armies and their war mammoths long defeated and caged behind their borders. Alone and sometimes reviled, she must choose her allies carefully. Rabbit, a handmaiden, sold by her parents to the palace for the lack of five baskets of dye, befriends the emperor's lonely new wife and gets more than she bargained for. At once feminist high fantasy and an indictment of monarchy, this evocative debut follows the rise of the empress In-yo, who has few resources and fewer friends. She's a northern daughter in a mage-made summer exile, but she will bend history to her will and bring down her enemies, piece by piece.

I finally caved and read The Empress of Salt and Fortune by Nghi Vo. It’s been sitting on my tablet since I got it when it was one of Tor.com’s eBook club titles. And one night, I read the first sentence and was hooked.

The Empress of Salt and Fortune was an engrossing tale about how the life of a girl from humble beginnings got tangled with that of an empress. It recounted their time in exile and everything that entails. It was a beautiful story. And the majority of it is an embedded narrative, with a character (Rabbit) telling another character (Chih, a cleric, and Almost Brilliant, a neixin) their story.

This is one of my favorite storytelling conventions, and when it’s done well it can have an excellent effect. Each part of the story within the story in The Empress of Salt and Fortune was contained in respective chapters. I really enjoyed the format because of how much space it gave the present characters to interact, while also correlating their conversations—and the clues within the setting—to the history being imparted by Rabbit. The characters were, after all, what helped make the story so interesting. Chih and Almost Brilliant were favorites from the start, and Rabbit’s voice easily stole half the stage. All three propelled the story forward.

The point of The Empress of Salt and Fortune can be summed up by one of its earlier passages:

And what a marvelous story it was!

Breana: Tove Lo has an extensive backlist of music, and I have too many favorite songs to count. I wanted to mention another track from Dirt Femme. It's called Suburbia, and I've had it on repeat.

Adri: I've been trying to branch away from my playlist some more. So, today I'm listening to Tequila Mockingbird by Ramsey Lewis.