**Note from Breana: Adri wanted to try out The Friday 56 and Book Beginnings. However, she is busy today so I will be around to answer comments and visit other blogs.** 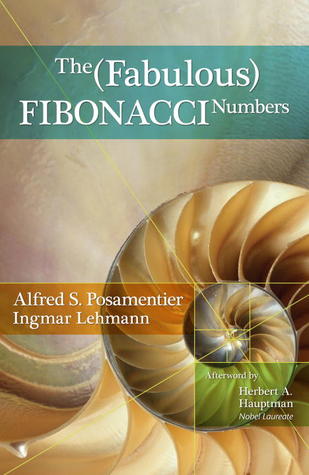 The most ubiquitous, and perhaps the most intriguing, number pattern in mathematics is the Fibonacci sequence. In this simple pattern beginning with two ones, each succeeding number is the sum of the two numbers immediately preceding it (1, 1, 2, 3, 5, 8, 13, 21, ad infinitum). Far from being just a curiosity, this sequence recurs in structures found throughout nature - from the arrangement of whorls on a pinecone to the branches of certain plant stems. All of which is astounding evidence for the deep mathematical basis of the natural world.

With admirable clarity, two veteran math educators take us on a fascinating tour of the many ramifications of the Fibonacci numbers. They begin with a brief history of a distinguished Italian discoverer, who, among other accomplishments, was responsible for popularizing the use of Arabic numerals in the West. Turning to botany, the authors demonstrate, through illustrative diagrams, the unbelievable connections between Fibonacci numbers and natural forms (pineapples, sunflowers, and daisies are just a few examples). In art, architecture, the stock market, and other areas of society and culture, they point out numerous examples of the Fibonacci sequence as well as its derivative, the "golden ratio." And of course in mathematics, as the authors amply demonstrate, there are almost boundless applications in probability, number theory, geometry, algebra, and Pascal's triangle, to name a few.

Accessible and appealing to even the most math-phobic individual, this fun and enlightening book allows the reader to appreciate the elegance of mathematics and its amazing applications in both natural and cultural settings...

Beginnings: “With the dawn of the thirteenth century, Europe began to wake from the long sleep of the Middle Ages and perceive faint glimmers of the coming Renaissance.”


56: “Although our focus is largely about the Fibonacci numbers, we should not think of Fibonacci as a mathematician who is known only for his now-famous sequence of numbers that bears his name.”

Comments: There is a long story as to how I found about this book. For now, let’s just say I was intrigued by the relationship of the golden ratio and the golden spiral–which is prevalent in both art and nature. Then I was further drawn in by the periodicity of both the numbers and equations the Fibonacci numbers can make. I just had to find out more, so I went to my library and picked this book up.