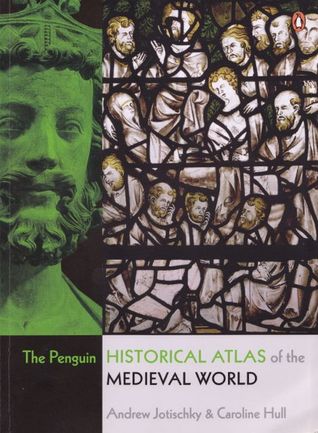 
The Penguin Historical Atlas of the Medieval World traces the development of peoples, cultures, and faiths between the coming of the barbarian invasions in the fourth century and the first voyages to the New World in the sixteenth. This colorful atlas illustrates the sweeping changes from the fall of the Roman Empire to the birth of Islam, the rise of Christianity, and the role of Judaism across Europe. Packed with vivid maps and photographs, this atlas is a perfect guide to Europe and its neighbors in the Middle Ages....

Beginning: "The 5th-century emperors in the West had been all but powerless for two generations before 476, and dislocation of the western provinces from central rule was an ongoing feature of the whole 5th century."

56: "Benedict envisioned his monasteries as self-sufficient communities supporting themselves through manual labour."

Comments: The Penguin Historical Atlas of the Medieval World is one of the books I recently checked out from the library. It's all about Medieval history, and I found a lot of the information fascinating. What are you reading this week?