When I first sat down to brainstorm about what I was going to do, art wise, in October, I already knew I wasn’t going to participate in Inktober. I wanted to work in pencil instead of ink, and I wanted to get them done before October. And that’s what I ultimately decided on. Note: I’m not posting these in order, so I know the dates on the pictures aren't in chronological order. 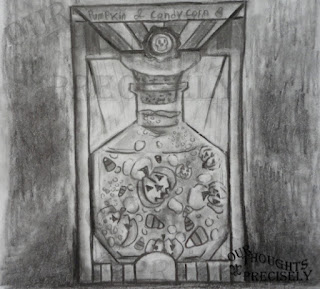 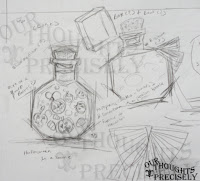 The first drawing I worked on is called Halloween in a Bottle for $5.99. The idea behind it is along the lines of being able to buy a little bit of Halloween that’s, of course, in a bottle. You can see some of the early sketches I did for it. There are some pretty big difference between where the idea began, and where it ended up. Originally, there was supposed to be a bow, but then I scrapped that idea in favor of the box. And the box went from being simple and clear to decorative.

What are you working on this October?