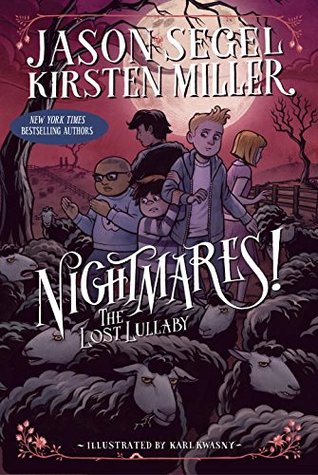 1. There’s a NEW GIRL at school, and Charlie and his friends have DEFINITELY seen her before.
2. He’s been hearing strange noises after dark, which is NEVER a good sign.
3. The nightmares are back, and they’re WEIRDER THAN EVER.

Not since he faced his fears has Charlie had so many bad dreams. Whenever he falls asleep, he finds himself in a Netherworld field, surrounded by a flock of CREEPY BLACK SHEEP.
They're not counting sheep. They refuse to jump. In fact, they don't do much at all. EVEN EERIER, THOUGH, is that it’s not Charlie’s nightmare. Somehow he’s trapped in someone else’s bad dream. And he’s pretty sure the twins ICK and INK are responsible.
Charlie and his friends thought they’d put the twins out of business, but it seems they didn’t quite finish the job. Now the WOOLLY NIGHTMARES are closing in, and INK has shown up at Cypress Creek Elementary! Charlie’s convinced that INK is up to NO GOOD. And if he’s right, it could be a very long time before anyone’s dreams are sweet again...

"He'd only just finished when Charlotte appeared in the kitchen and gave Charlie's father a kiss. "Charlie's annoyed with me."
Charlie crossed his arms and raised an eyebrow at his stepmother."--The Lost Lullaby by Jason Segel & Kristen Miller, illustrated by Karl Kwasny

Comments: I basically binge read the rest of this series. And oh man, The Lost Lullaby was such a good book.