The Friday 56 (93) & Book Beginnings: A Dash of Magic by Kathryn Littlewood 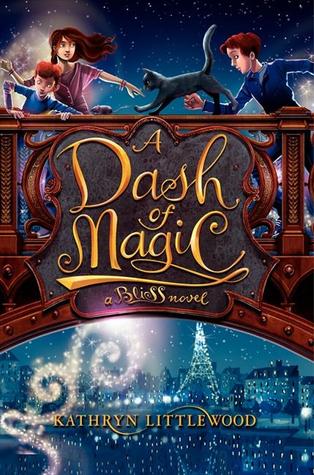 Rosemary Bliss will do anything to get back her family's magical Cookery Booke. That's why she challenges Aunt Lily to an international baking competition in Paris: If Rose wins, Lily agrees to return the cookery Booke that she stole. If Rose loses...well, the consequences are too ugly to think about. But Lily isn't playing fair--she's using a magical ingredient to cheat. The only way for Rose to compete is for her to find magical ingredients of her own. Together with her long-lost grandpa, his sarcastic talking cat, and a turncoat French mouse, Rose and her brothers race around Paris to find essential--and elusive--magical ingredients that will help her outbake--and outmagic--her conniving aunt. She has to win or the Bliss Cookery Booke will be lost to her family forever...

Beginnings: "It was nine months after her aunt Lily stole the Bliss Cookery Booke right our from under her nose that Rosemary Bliss discovered something horrible on the shelves of Ralph's Super Mart in Downtown Calamity Falls."

56: "At the end of the long corridor was a man in a black suit and white gloves. He was holding up a poster board with Bliss printed on it in block letters."

Comments: I really did enjoy the beginning of A Dash of magic. At the mention of Calamity Falls I automatically thought of Gravity Falls, just because the names are kind of similar. They don't actually have anything to do with each other. As for the rest of the book, A Dash of Magic was alright. I had some problems with it, but overall, the story was pretty good.

Email ThisBlogThis!Share to TwitterShare to FacebookShare to Pinterest
Labels: A Dash of Magic, Book Beginnings, Kathryn Littlewood, The Friday 56