Typically I share recipes I’ve recently tried whenever I have a new Weekend Tidbits post for the blog. However, I’ve decided to try a different approach by dedicating an entire post to whatever recipe I want to talk about, instead of just mentioning it. In light of that, today I’m here to talk about one of the best recipes I’ve come across online: Baking Powder Pizza Crust. The recipe I use (with some minor adjustments) is The Bake-Off Flunkie’s Baking Powder Pizza Crust. It’s my go-to recipe for baking powder pizza crusts. 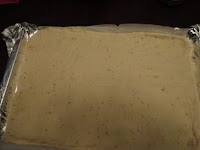 Now, before I get more into all the little changes I’ve made, I just want to mention that you shouldn’t approach this crust and expect it to be a carbon copy of a yeast crust. If that’s what you’re expecting, you’re essentially setting yourself up for failure. Baking powder isn’t the same as yeast, and I don’t expect it to behave the same. I appreciate this recipe for its easiness, texture, and flavor. I just consider it to be its own thing rather than trying to compare it to the traditional method. If you’ve made a yeast pizza crust before like I have, then you know it takes some time for it to rise and all that. I don’t mind doing that, but sometimes I don’t feel like having to wait as long. And that’s where this recipe comes into play. It takes less than half the time to rise. Trust me when I say that this is actually a very simple recipe to make. I’m not going to talk about toppings because that’s one of the more subjective parts about pizza. You make it how you personally want it to taste, with your favorite toppings. (pictured below is just cheese (right) and a ground turkey & pepperoni pizza (left)) 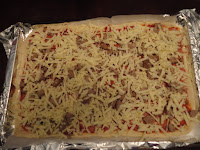 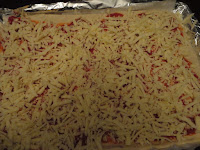 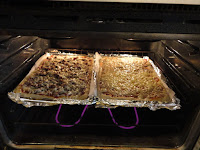 The adjustments I make start with the dough. I don’t double the recipe but I one and a half it, which is the perfect amount of dough for the two rectangle cookie pans that I always use because they fit in my oven side-by-side. (Pictured to the left) I also add seasoning into the crust, rather than brushing it on with more oil. One of my recent favorite combinations is 2 tsp of minced garlic & 1 tsp of thyme. Another major adjustment is that I cook the pizzas for a little bit longer. So, instead of 6-8 minutes, I normally set the timer for around 10-13 instead. I think it has more to do with my oven, and I recommend sticking to the recipe and adjusting the cook time as you see fit. But remember to check the bottom and if it's lightly browned then it’s definitely done. I personally like to cook the pizzas until the cheese is a little crispy.

What do you think? Is this a recipe that you would be willing to try? Also, do you add different flavors to your pizza crust?