I Made A Sketchbook...

In my mid-year resolution check-in post, I mentioned that I wanted to get a smaller sketchbook so my goal of finishing one was more manageable. In the end, I chose to make a sketchbook since I wanted to try out a different technique of binding the signatures together instead of using staples. There are a number of good tutorials on youtube, but the best ones I found were Following the White Rabbit DIY journal/sketchbook tutorial series that you can find HERE. The steps were straightforward, and the visual/ real-time tutorial made it easier to pick up on what had to go where and when. . . . 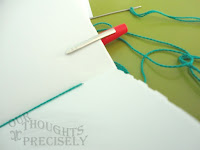 I had a lot of fun with this project. It was easier than I thought it was going to be. What I mean by that is that I way overestimated the difficulty of it, because it’s not difficult at all. The paper I chose was just some sketch paper I had. Because of the size, I cut the sheets in half at the center before folding them three or four at time to create my signatures. The actual binding part took a little bit of
time to get used to, but once I did, it was mostly smooth sailing from there.

After my signatures were bound together, I moved on to constructing the cover. I thought “oh hey, I’m just going to do something simple,” which was followed by “this is going to be quick.” No. that’s not how it turned out, because I added a pocket and a ribbon (to tie it shut) at the back. The cover itself was easy to put together since it’s literally three pieces cut from a single sheet of card stock, which I taped together with tape I had lying around my house. Where it got complicated was the pocket and the ribbon tie. I decided to braid the ribbon after spending at least ten minutes deciding how I wanted the pocket to look. I’m not complaining about the time I spent on it, because I like the look of it. And the skills I learned during the process will come in handy when I attempt to make another sketchbook.

Overall, I was happy with the results. If I do this again, I’ll probably use different materials such as stronger tape—preferably something with a pattern—and I would replace the card stock with cardboard and a fabric overlay as a finish. Also, my binding wasn’t as tight as I wanted it to be and it may have had to do with the type of string I used. It was quite thin. So, next time around, I might look into getting a different type that’s a little stiffer, like twine.

Have you considered making a sketchbook or journal?

Email ThisBlogThis!Share to TwitterShare to FacebookShare to Pinterest
Labels: art, DIY, I made a skechbook, Thought Corner