Breana: Last week, I took an impromptu break from blogging. Now that I’m back, I wanted to participate in Music Monday, because one of the youtubers I follow did the opening theme for Beyblade Burst Turbo. And I took an unexpected trip down nostalgia lane. I haven’t kept up with Beyblade even though I used to watch the original series plus the seasons after it. I mean, I was a really big fan of the show to the point where I had one of the stadiums + some of the Beyblade sets. 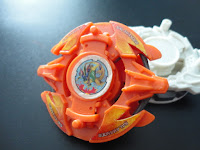 After a quick search, I discovered that I still have two of my old Beyblades; although, the white one is missing a piece. But, they’re pretty old now. And I was actually surprised that after all these years, the stickers on the orange one are still there and recognizable/readable so I can’t really complain. But that was years ago. However, the funny thing is I just happened to be following NateWantsToBattle when he did the announcement video revealing that he did the vocals for Turbo. I like this song and wish there was a full (longer) version of it to purchase....