Typically when I have tacos or burritos, I don’t eat it with refried beans. I usually mix in drained/rinsed black beans from a can, and cook it all together with the taco seasoning. I like it that way, but recently I was in the mood for refried beans, just without it being so oily. Once I had the thought, it turned into a craving. I did not have any, of course, and I also didn’t want to go to the store to get it. So my choice was clear: I was just going to have to make it. 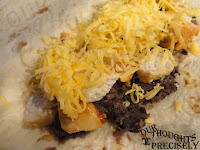 With the powers that are a quick google search, I found this 10 minute Refried Black Bean recipe from Joy Food Sunshine. This recipe was truly simple to assemble, and even quicker to cook. There wasn’t much effort involved at all, and it came out perfectly. [**Note: the only changes I made were doubling the recipe and I also didn’t add any cilantro. It really depends on how many people you’re making it for. Otherwise the basic recipe is fine as is.]

As for the taste it was fantastic. I paired it with simple chicken and cheddar cheese, and it was delicious. It tasted just like the stuff from the can. Except, I got more of the flavor from the seasonings that were added, and there was no extra oil in this recipe. Even the texture was similar. [Note: I used a masher to crush the bean and broth mixture in the pot, but it was soft enough to use a fork or spoon if I’d wanted to.] I also think it would pair quite well with whatever taco or burrito mixture you want.

Ultimately, I see myself using this recipe again. What have you been cooking recently?