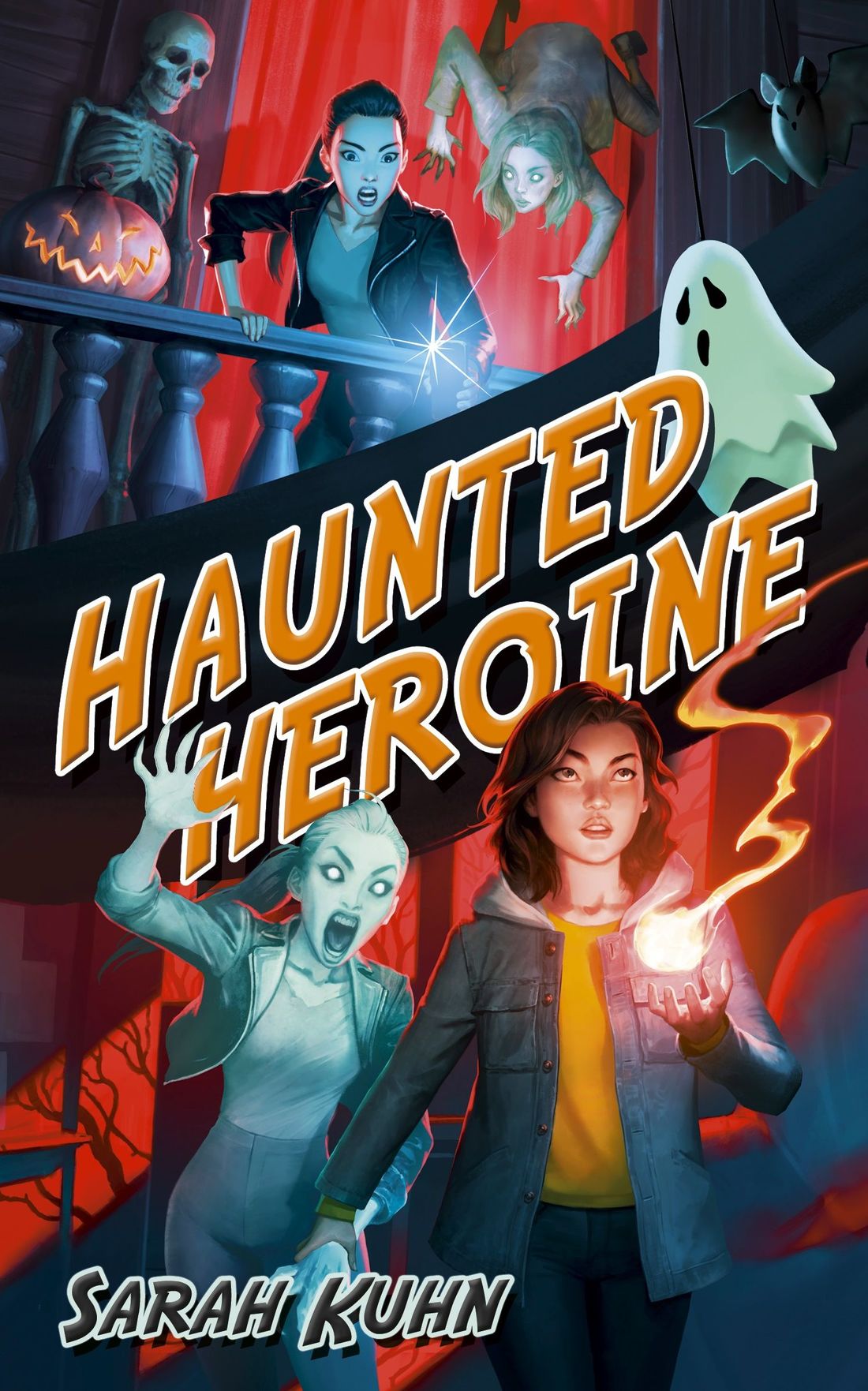 
The fourth book in the smart, snarky, and action-packed Heroine series follows Evie Tanaka, Aveda Jupiter, and Bea Tanaka as they combat a new supernatural threat.

Everything in Evie Tanaka's life is finally perfect. As a badass superheroine, she defends San Francisco from demon invasion on the regular. Her relationships with superhero partner Aveda Jupiter, little sister Bea, and hot, half-demon husband Nate have never been stronger. Maybe it's possible for a grad school dropout turned put-upon personal assistant turned superhero to have it all? As if things can't get any better, Evie learns she's pregnant. She's overjoyed, but also worried about whether she's cut out for motherhood. Before she can dwell on her dilemma too much, a women's college reports a string of mysterious "hauntings," and Evie and Aveda are called in to investigate. When the hauntings turn deadly, they decide to move into the dorms full-time, going undercover as grad students. As she lives out a bizarre version of her grad school life, Evie can't help but wonder about the road not taken: what would her life be like if she'd stayed here instead of pursuing superheroing with Aveda?

If there was ever a series that needed more books, it was this one. I was excited when Haunted Heroine got announced, and now that I’ve read it I can say for certain that the excitement was well deserved. Haunted Heroine was a fantastic addition to the Heroine Complex series. It was an excellent continuation for the characters of the series—and as they embarked on the next chapter in their story, they were literally and figuratively being haunted by things from the past and present. With this kind of story, it was an emotional rollercoaster from start to finish, and I was rooting for the characters every step of the way.

Haunted Heroine is told from the perspective of Evie Tanaka, one of my favorite characters. Her POV is what introduced the series, and her perspective was just as delightful to read from as the first time around, in Heroine Complex. While the beginning was looking at her future—with her husband, Nate, and her pregnancy—much of the story explored Evie’s past. That also included an old relationship that has haunted (no pun intended) Evie in previous books in the series. It had affected her relationships with others, as well as how she saw herself. So it was great to see it finally addressed. Plus Kuhn’s handling of the emotional side of the character arcs was fantastic. It was one of my favorite aspects about the story, and I felt like a lot of the lingering plot threads from previous stories reached a satisfying resolution.

It was also great to see how the other characters in the series were adjusting to changes in their lives/ what they were currently doing after the end of the third book—including Evie’s younger sister, Bea, Aveda, and everyone else. Evie and Aveda’s friendship has always been one of the highlights of the series, even with the ups and downs. I liked how they were both still working on their friendship, but there was never a doubt that there was a bond there.

Overall, I liked Haunted Heroine’s story. It took place in October, and the setting—Morgan College—was different from the more familiar urban city setting of San Francisco. The grounds of the college afforded for something of a spooky atmosphere, and it was a perfect place for the latest mystery to play out.

Haunted Heroine is one of the best books I’ve read so far this year. If you’re a fan of this series, then this one should be on your TBR list.

Sarah Kuhn is the author of the popular Heroine Complex novels—a series starring Asian American superheroines. The first book is a Locus bestseller, an RT Reviewers’ Choice Award nominee, and one of the Barnes & Noble Sci-Fi & Fantasy Blog’s Best Books of 2016. Her YA debut, the Japan-set romantic comedy I Love You So Mochi, is a Junior Library Guild selection and a nominee for YALSA’s Best Fiction for Young Adults. She has also penned a variety of short fiction and comics, and her hotly anticipated graphic novel Shadow of the Batgirl is coming out in early 2020 from DC Comics. Additionally, she was a finalist for both the CAPE (Coalition of Asian Pacifics in Entertainment) New Writers Award and the Astounding Award for Best New Writer. A third generation Japanese American, she lives in Los Angeles with her husband and an overflowing closet of vintage treasures.

Disclaimer: This copy of the book was provided by the publisher (DAW Books) via netgalley for this review, thank you!