Review: The Case Study of Vanitas volume 4 by Jun Mochizuki 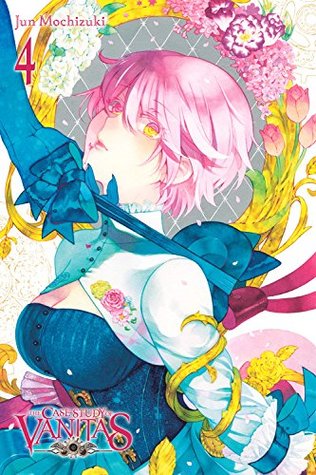 
Deep within the bowels of Paris, Noé and Vanitas race through the catacombs with an elite team of chasseurs, the Church's anti-vampire unit, in hot pursuit. Their search for the missing vampires takes the pair down a path all too familiar to Vanitas, bringing them face-to-face with not only an overwhelming curse-bearer, but also with Vanitas's past. Confronted by the horrific menace, what will Noé and Vanitas fight for, and whom will they save...?

I had some arcs to get through last month, so I didn’t have as much time to read anything else. It wasn’t until recently that I finally got around to reading volume 4 of The Case Study of Vanitas. This series is so good so far.

I’m enjoying the story, as well as the way Mochizuki created this alternative version of Paris. The illustration of the setting is just perfection, and the way the various locations are used to set the tone of a scene creates a very atmospheric reading experience. I liked all the real-world details and history incorporated into the story. It seamlessly fit with the fantastical elements—like vampires and Astermite (a type of stone that also went through rewriting during the “Babel incident”)—and there are layers of complexity to the series, which is only just beginning to be explored in-depth.

This volume was action-packed and further expanded the world with the continued conflict between the protagonists and the church’s anti-vampire Chasseurs. I have to admit that I like the Chasseurs. They’re a tough group, and I liked the way they were portrayed. Roland, in particular, was an entertaining character. He provided a few comical moments, which broke up the tension a little. This volume also explored more of Vanitas’s past, and it was as forlorn as I thought it would be. It only raised more questions about his connection to the Vampire of the Blue Moon as well as how he ended up with The Book. The witty banter between Vanitas and Noé is one my favorite parts of the dialogue. As I’ve mentioned before, their personalities are polar opposites, and that means that they often clash. However some of the best moments were when Noé and Vanitas got along enough to work together, and their dynamic during combat was one of my favorite aspects about volume 4.

A few familiar faces also appeared in volume 4 too. The chapters with Jeanne were kind of cute, before they got serious. Generally speaking, I hope there’ll be more about her character sometime soon.

Volume 4 was fantastic, and I’m looking forward to where the story goes next.