Alice in Zombieland, yeah, I don’t know where to begin with this one. It wasn't what I was expecting, and I'm not sure if that was such a good thing. I finished this book over the weekend and it took me a few days to sort out my feelings on it. For the longest time—I couldn't decide on how I wanted to rate this book. I wrestled over the choice between 3 or 2.5 stars. Because Alice in Zombieland was by far, not the worst book I've read, but I didn't love it either. It was in this sort of weird place between average and below for me.

What I liked about the book was the zombies, they were different, and I did enjoy the storyline surrounding them. Actually, the story wasn’t half bad. It was ok. The writing was also just ok and I don’t really have much to say on it. What I didn't like so much were the characters. Alice…*sigh*. Seriously, I get that she was hurting and grieving in her own way, but some of her choices weren’t that smart. I know that she was put into some situations that were out of her control, but I just didn't like her much. She almost seemed to be a typical YA heroine. Now Cole, he was the typical YA bad boy with a chip on his shoulder and a secret compassionate side. Did I enjoy reading about some of his actions? No.

Alright, so I admit that I might have judged this series based off its titles. So I was expecting a little more Alice in Wonderland vibe than what I really got. It was a zombie book—I don’t really have any other way to describe it. So while I had high expectation for this book, in the end I was left feeling indifferent. So I’m going to give this a 2.5. That’s all. 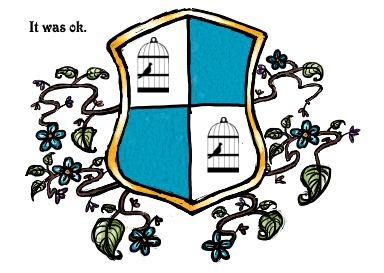 Email ThisBlogThis!Share to TwitterShare to FacebookShare to Pinterest
Labels: Alice in Zombieland, Gena Showalter, two and a half birdcages