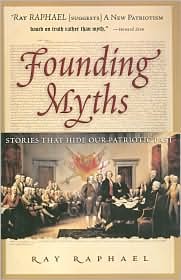 Much of what you thought you knew about American history is wrong...

Our best-loved tales actually sell America short, Raphael says. This nation was founded not just by the handful of "founding fathers" we have come to admire, but also by the revolutionary activities of innumerable and nameless patriots who are not mentioned in textbooks. Why should only a select few get the credit? The collaborative spirit and effort of the American people is an important concept for children (and adults) to learn...

"Not until patriots and Redcoats had engaged in pitched battles for the better part of a year did Samuel Adams publicly advocate a total break from Britain."--Founding Myths by Ray Raphael

Comments: I finished this book earlier in the week, and it was pretty interesting. It offered an interesting perspective on historical inaccuracies.

What are you planning to read this weekend?