The Friday 56 (64) Rain: A Natural and Cultural History by Cynthia Barnett 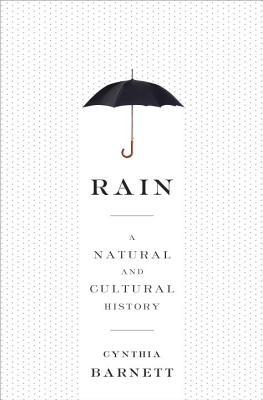 It is the subject of countless poems and paintings; the top of the weather report; the source of the world's water. Yet this is the first book to tell the story of rain. Cynthia Barnett's Rain begins four billion years ago with the torrents that filled the oceans, and builds to the storms of climate change. It weaves together science—the true shape of a raindrop, the mysteries of frog and fish rains—with the human story of our ambition to control rain, from ancient rain dances to the 2,203 miles of levees that attempt to straitjacket the Mississippi River. It offers a glimpse of our "founding forecaster," Thomas Jefferson, who measured every drizzle long before modern meteorology. Two centuries later, rainy skies would help inspire Morrissey’s mopes and Kurt Cobain’s grunge. Rain is also a travelogue, taking readers to Scotland to tell the surprising story of the mackintosh raincoat, and to India, where villagers extract the scent of rain from the monsoon-drenched earth and turn it into perfume.

Now, after thousands of years spent praying for rain or worshiping it; burning witches at the stake to stop rain or sacrificing small children to bring it; mocking rain with irrigated agriculture and cities built in floodplains; even trying to blast rain out of the sky with mortars meant for war, humanity has finally managed to change the rain. Only not in ways we intended. As climate change upends rainfall patterns and unleashes increasingly severe storms and drought, Barnett shows rain to be a unifying force in a fractured world. Too much and not nearly enough, rain is a conversation we share, and this is a book for everyone who has ever experienced it...

""We live submerged at the bottom of an ocean of air." But when it came to describing and talking about the rain, neither science nor letters could ever sum it up quite so tidily. Rain's chaotic nature made it among the hardest parts of the weather to measure--and even to name."--Rain: A Natural and Cultural History by Cynthia Barnett

Comments: My pick this week is taken from page 75 instead of 56. I liked this paragraph better than the choices I had to choose from actually on page 56. Out of the nonfiction books I've read this year, I don't think I've picked up one that was specifically about rain. So far, I really like this book. What are you reading this week?

Email ThisBlogThis!Share to TwitterShare to FacebookShare to Pinterest
Labels: Cynthia Barnett, Rain: A Natural and Cultural History, The Friday 56