Today, I have a different kind of review to share on the blog. I'm going to be talking about one of my recent purchases: Canson Watercolor Paper. The example I’m going to be using for this post are from a page of birds that I painted on August 16th, 2017. Birds are actually sort of one of my weaknesses, and usually I'll draw quick simplified ones that don't require much of anything at all. I had a lot of fun with this page; although, I feel like I could have done a little better with the Christmas Robin. But it is what it is. Luckily, I'm only using the pelican as a example. The European Robin is just the sad bird that hangs out in the corner of a couple of the pictures.

Some things to know... 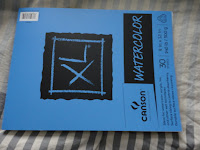 Canson is a brand that came highly recommended—thanks Adri—and I was eager to try their watercolor paper for myself. Here's what it essentially looks like. Outward appearance is pretty normal for what you would expect from watercolor paper. The size is also pretty standard when compared to what I've used before. 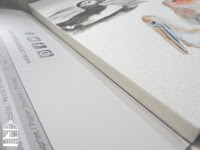 However, that being said, I do like the interior design. When you open the cover it’s not directly attached to the paper, so you can fold it back and have it out of the way. I found that to be incredibly useful since my desk has a very limited surface space left over between my laptop and art supplies. This feature is particularly useful when I don't necessarily want to take the page off of the stack.

Now, the paper is basically the selling feature. I've used 90lb cold press, and let me tell you it's nothing like the 140lb. For one, the latter is a lot sturdier. Two, I liked the way the paint dried. Reeves already has a matte finish, but between this paper and the one I was using, Canson was noticeably smoother. Three, it handled the water well. It does warp under heavy saturation, but if you have tape around the edges it'll be fine. And four, reworking top layers of paint is easy.

The progress of the Pelican from left to right...

The progress of the pelican shows what I mean about the potential for reworking. This is the only bird I didn't work on continuously. I set it aside for a least an hour before returning and it was easy to get right back to smoothing out some of the edges—particularly in the brown and blue areas along the head, neck, and wing. 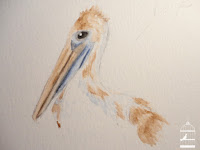 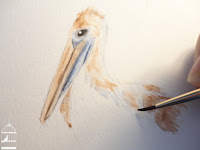 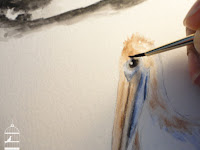 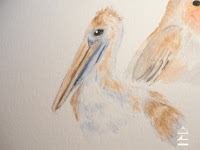 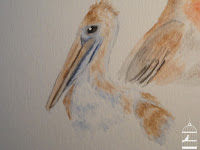 (Finished pelican was touched up with a bit of white Sakura Gelly Roll gel pen around the blue part beneath the brown of the beak.)

Overall, I‘m really happy with this paper and will be buying more from this brand in the future. One more thing: Puffins are now my favorite bird. They’re adorable. I didn't get the progress of the puffins on camera, but I wanted to post them anyway. So, here are a pair of bonus Puffins. If you look in the corner of the picture on the left, the European Robin makes another very small appearance, LOL... 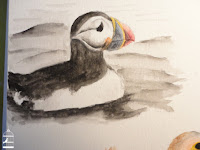 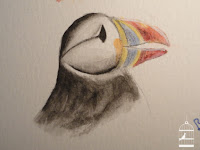 Have you tried any of Canson's paper? If so, tell me about your experience in the comments down below. And if not, would this be something you would be interested in? Or what is u our favorite type of watercolor paper.