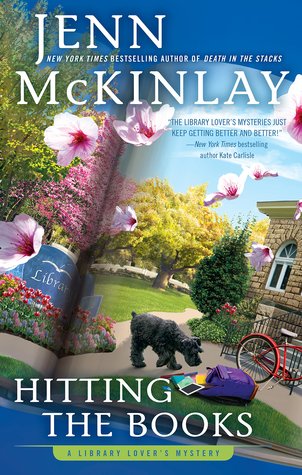 It's murder by the book in the latest hit Library Lover's mystery from the New York Times bestselling author of Death in the Stacks...

When a stack of library materials is found at the scene of a hit and run, library director Lindsey Norris finds herself dragged into the investigation as the police try to link the driver of the stolen car to the person who borrowed the books. Before Lindsey can delve into the library's records, the victim of the hit and run, Theresa Houston, suffers another "accident" and the investigation shifts from driver negligence to attempted homicide. A clue surfaces in the confiscated library materials that could crack open the case and it is up to Lindsey to piece it all together. But things are not as they seem in the sleepy town of Briar Creek and when the driver of the stolen car turns up dead, Lindsey, her staff and her library friends have to hit the books before the murderer gets the last word...

Hitting the Books by Jenn McKinlay is the third book I’ve read in the Library Lover’s Mystery series, and it’s by far one of my favorites. It’s been a while since I last thought about this series, but I still remember the previous book. I liked Death in the Stacks—it was one of my favorite books I read in 2017—but Hitting the Books just seemed like more of everything. I mean that in a good way.

The basic premise of the story is: Lindsey Norris, library director and avid fan of fiction, gets involved in yet another mystery, a hit-and-run that leads to a complicated case. In terms of cozy mystery novels, Hitting the Books was a solid read.

It had an excellent story. The opening chapters were a great setup for the mystery that the main character, Lindsey Norris, ends up involved in. Some parts I was able to guess. That being said, the build-up to the end had an excellent pace. The reveals came at the right time and were bolstered by some unexpected action that led to a continued sense of tension. There was more action due to the danger being posed to the characters, because of the kind of mystery Hitting the Books was. The subsequent implications and later ramifications raised the stakes and made the story seem more exciting. I liked it a lot.

The world-building was also nice. It’s kind of a typical setting for cozy mysteries—small, idyllic coastal town that’s portrayed as being a close-knit community. That being said, the characters were interesting—some were a little more unique than others—and the overall story was good.

The characters are worth noting here, because I liked a lot of them. Most of them were familiar faces from the previous books. There was a good deal of character development that took place alongside the mystery. I liked those scenes because it showed the usual cast of characters at varying stages of their lives including the newly married, new parents, budding romances, and long-term relationships that continued to develop.

Overall, Hitting the Books was good, and I’m looking forward to whatever McKinlay writes next....

Jenn is the New York Times and USA Today bestselling author of several mystery series and will be debuting a new women's fiction series in June 2017, starting with the title About a Dog. She lives in sunny Arizona in a house that is overrun with kids, pets and her husband's guitars.

Disclaimer: This copy of the book was provided by First to Read for this review, thank you!