Late in March, I was making a birthday cake for a relative. The flavor, by request, was supposed to be Black Forest, and the base to that is typically chocolate, cherry, and vanilla. Since I didn’t have a tried-and-true recipe for that type of cake, I tried something new. [Note: all pictures used in this post are ones I took myself.]

One of my favorite types of cake and doughnut is sour cream. I love the difference in the texture of the crumb. And this Dark Chocolate Sour Cream Cake recipe from allrecipes proved to be a perfect fit. Here are the results.

The standard size of cake I make is determined by the pans I’m using. The recipe called for three nine-inch pans. However, I used two ten-inch round metal pans instead. The recipe made enough batter for two good sized layers without having to make any additional batches. 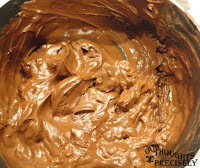 This cake was super simple to make. One interesting part of this recipe was how the cocoa powder and boiling water were mixed and cooled before being added to the cake. It had a consistency like pudding.

[Note: I had to bake the cakes for about 10 extra minutes. It depends on your oven so follow the recipe, and check the center to make sure it’s done before adding any extra time. Also I put parchment on the bottom of each pan, and that’s just to keep the cake from sticking.]

So how did it taste?

It tasted kind of like an Oreo cookie. It had a strong dark chocolate flavor, and didn’t taste too sweet which I liked. I was surprised at the depth of flavor, considering that there was no coffee in the recipe. The cake proved to be a great combination with the cherry pie filling and cream cheese buttercream frosting that we added later. I’m not sharing any pictures of the final cake, because it was for a birthday. However, I did snap a few pictures with the crumb-coat on it, as well as how the inside looked after it was cut.

Between the texture and the flavor, I will likely use this recipe again in the future. Have you done any baking recently? If so, what was your favorite dish or dessert you made?