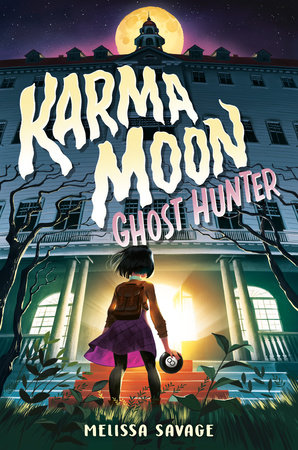 While staying in a haunted Colorado hotel for her father's ghost-hunting television series, Karma Moon must battle her anxiety, interpret the signs of the universe, and get footage of a real ghost--you know, the usual.

Karma Moon is a firm believer in everything woo-woo, as her dad calls it. So when she asked her trusty Magic Eight Ball if the call asking her dad to create a ghost-hunting docuseries was her dad's big break, it delivered: No doubt about it. Because the universe never gets it wrong. Only people do. Karma and her best friend, Mags, join her dad's Totally Rad film crew at a famous haunted hotel in Colorado over her spring break. Their mission: find a ghost and get it on camera. If they succeed, the show will be a hit, they can pay rent on time, and just maybe, her mom will come back. Unfortunately, staying at a haunted hotel isn't a walk in the park for someone with a big case of the what-ifs. But her dad made Karma the head of research for the docuseries, so she, Mags, and a mysterious local boy named Nyx must investigate every strange happening in the historically creepy Stanley Hotel. Karma hopes that her what-ifs don't make her give up the ghost before they can find a starring spirit to help their show go viral--and possibly even get them a season two.

With Melissa Savage's quirky cast of characters and spooky setting underlaid by a touching and relatable struggle against anxiety and grief over her fractured family, Karma Moon--Ghosthunter is bound to charm and delight.

In the past year or so, I’ve read a number of middle grade ghost stories—everything from The Forgotten Girl by India Hill Bown to Ghost Squad by Clairbel A. Ortega. So, I was more than thrilled to get an ARC of Karma Moon: Ghost Hunter. This one turned out to be just okay. It was less of a ghost story and more about the characters—which gave it a more contemporary feel—and the paranormal aspects were kind of sparse and didn’t happen until much later.

The book spent a lot of time on movie references rather than building up its own ghostly-lore and spooky atmosphere. Even the subjects of the ghost hunt took a backseat to the analysis of movies like Poltergeist and The Shining. The last one I kind of get, since the setting of this book was the Stanley Hotel, which is the same one from the Shining. However, there were some interesting ideas here, and I wish they had taken up a little more of the focus in the story.

Where Karma Moon: Ghost Hunter excelled was in its messaging. A lot of the story dealt with an absent parent and how it directly affected Karma, who was twelve. I did like how the author chose to handle the main character—i.e. the detail about her therapy sessions just being a part of her life. That was great. It was excellent. Savage nailed it.

Overall, Karma Moon: Ghost Hunter was fine. If you go in expecting a story that shines a light on its characters—rather than ghosts and other paranormal happenings—you’ll like this one a lot. I also think the book’s target audience would enjoy this one, particularly for readers who don’t like a lot of scary occurrences. So I do recommend it.

About the author....
Melissa is a writer and a child and family therapist. She has worked with families struggling with issues of abuse, trauma and loss/bereavement. She believes that expressing oneself through writing can be a very healing process when struggling with difficulties in life. In addition it can be a vehicle in which to honor, celebrate and continue to share the spirits of the special people who have left us too soon. Melissa lives in Phoenix.
Goodreads     Website     Twitter

Disclaimer: this copy of the book for this review was provided by the publisher (Crown Books For Young Reads) via Netgalley, thank you!