Dark Waters was finally released in August. It’s been a few years since I read the first two books, and to prepare for it, I decided to do a reread of Small Spaces and Dead Voices. I figured there was no better time to do it than in October.

A bit of history…

When I picked up the series, I originally read them from the library. It’s been one of my backburner goals to add to my collection of Arden books, and since I liked the series so much, I knew I would eventually end up with copies for my shelf. I didn’t get around to it until August of 2021. But better late than never, right? So it’s been quite some time since I read Small Spaces.

Small Spaces is one of my favorite books, and I wanted to see if my memory of what the story was is actually how it reads. I remember having a lukewarm reaction to the first few chapters. However, upon my reread, I have a much better appreciation for the characters and details. I also noticed how atmospheric the story is. The October scenery in the town, Evansburg, fit well with the earlier chapters, which—initially—seemed quite ordinary, if not a touch eerie with the title incorporated into a warning for Olivia “Ollie” Adler.

In the beginning, Ollie comes off as kind of brash, but I get what’s being portrayed here. I picked up on all the little clues sprinkled in about her character (some of which I missed or just forgot about), and I found her actions—like quitting her clubs and pulling away from people who were just trying to reach out to her—to be refreshingly frank for such a tough topic, but handled in a way that would fit for the target audience. There’s so much I could say about Ollie, but since it’s not alluded to in the synopsis, it would be massive spoiler.

One of the places where Small Spaces shines is how it creates its own local legends, and ties them into the current spooky happening in the story. Arden submersed the characters in situations where the past (which couldn’t rest both literally and figuratively) and the present collided. The story within the story, also titled Small Spaces, almost acted like a bridge. It was part memoir and part cautionary tale, which also contained some of the much needed answers to the big mystery of the book.

The scares are unique, to say the least. “The world behind the mist,” with the smiling man and his scarecrows, could be downright terrifying. And one of the best parts was how Ollie, Coco, and Brian navigated these challenges while having to face their own fears during a seemingly impossible situation.

Small Spaces is still one of my favorite stories, and it’s a great read for this time of year. I came away from my second foray into this story with a greater appreciation for it. And now, I’m looking forward to my reread of Dead Voices. Until next time, happy reading!

Breana: I've been listening to music by Mariah the Scientist. One of my favorite songs is All For Me.

Andrea: Hi all! This week I'm listening to some new music by familiar artists. I was surprised to find that The Temptations who are known for hits such as My Girl  (Lyric video featured below) & Papa Was A Rolling Stone are celebrating their 60th anniversary. I'm so excited that The Temptations have teamed up with Smokey Robinson to bring us their new song, Is It Gonna Be Yes or No. Elton John known for  a host of great songs including  I Guess That's Why They Call It The Blues also has new music on the Horizon.  Elton John  & Dua Lipa's new release is Cold Heart (PNAU Remix). I love the sound of  both groups' collaborations and would love to know your thoughts below. As Always, thanks for visiting Our Thoughts Precisely. Have an amazing week! 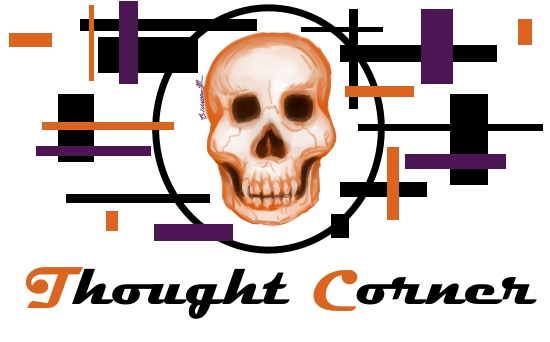 Breana’s Comments: While brainstorming ideas for what to do on the blog in October, I decided on something art related since it’s been awhile. And I knew from the start that I wanted to do something fun and colorful. I gave myself two prompts to fulfil on the second and last Sunday of October. Adri is joining me for this mini challenge as well.
Today’s prompt: Candy corn but make it lunch or an appetizer 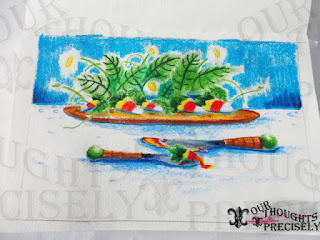 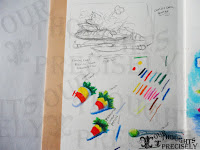 Breana’s Comments: I wanted to lean into the whole idea of candy as food. I actually like candy corn, and I envisioned it here as part of a salad, taking the place of cherry tomatoes or some other kind of vegetable. I wanted to keep my color choices bright. And honestly, I like Prismacolor colored pencils True Blue and Light Cerulean Blue. I've also included my sketch page, where I was deciding whether or not I was going to use crayon, crayon + marker, or Prismacolor colored pencils. 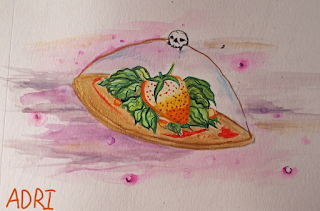 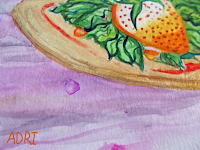 Adri’s Comments: It’s been a minute since I pulled out my Reeves watercolor gouache and I felt it was time to do so. I too opted for a salad, but with giant candy corn strawberry… Stracornberry? Sorry. I was originally going to have a previous character I drew holding a plate. Instead, I ended up with something like what you see above. I tried to add some of my gold acrylic, but it’s not that visible in the photo.

Stay tuned for our second and final prompt challenge on the 31st! Until then, thanks for stopping by and happy reading!

New York Times bestselling adult author of The Bear and the Nightingale makes her middle grade debut with a creepy, spellbinding ghost story destined to become a classic

After suffering a tragic loss, eleven-year-old Ollie only finds solace in books. So when she happens upon a crazed woman at the river threatening to throw a book into the water, Ollie doesn't think—she just acts, stealing the book and running away. As she begins to read the slender volume, Ollie discovers a chilling story about a girl named Beth, the two brothers who both loved her, and a peculiar deal made with "the smiling man," a sinister specter who grants your most tightly held wish, but only for the ultimate price. Ollie is captivated by the tale until her school trip the next day to Smoke Hollow, a local farm with a haunting history all its own. There she stumbles upon the graves of the very people she's been reading about. Could it be the story about the smiling man is true? Ollie doesn't have too long to think about the answer to that. On the way home, the school bus breaks down, sending their teacher back to the farm for help. But the strange bus driver has some advice for the kids left behind in his care: "Best get moving. At nightfall they'll come for the rest of you." Nightfall is, indeed, fast descending when Ollie's previously broken digital wristwatch, a keepsake reminder of better times, begins a startling countdown and delivers a terrifying message: RUN. Only Ollie and two of her classmates heed the bus driver's warning. As the trio head out into the woods--bordered by a field of scarecrows that seem to be watching them--the bus driver has just one final piece of advice for Ollie and her friends: "Avoid large places. Keep to small." And with that, a deliciously creepy and hair-raising adventure begins.

Beginning: "She wished she were on the other side of the glass. You don't waste October sunshine."
56: "Brian snorted and the strange tension broke."

Comments: Small Spaces is still one of my favorite tales. I'm doing a reread of the first two books of the series this October. I wanted to refresh my memory of the story before picking up Dark Waters. What are you reading this week?
Posted by Breana M. at 12:00 AM 16 comments:

Spooky Books to Read This October

Welcome! Today, Adri and I are going to share a list of some of our favorite spooky books we’ve read this year. Also, check out our list from last year HERE.

Breana: My first pick is What Lives in the Woods by Lindsay Currie (find the review HERE). I was lucky enough to get an ARC of this book, and it was an excellent story with a few genuinely creepy moments. The setting, an old and isolated museum, Woodmoor Manor, was the perfect location for a ghost story. It was a spooky read that also had a heartwarming resolution.

Adri: My first pick is The Shadows by Jacqueline West (find the review HERE). It was a reread, and I was excited to get back into The Books of Elsewhere series with Olive, three wise cats, and paintings in a creepy house.

Breana: My next one is Small Town Monsters by Diana Rodriguez-Wallach (find the review HERE). This book was one of my favorite reads so far this year. It had a lot of references to the conjuring universe (specifically Ed and Lorraine Warren), and Wallach’s use of paranormal aspects amongst an every-day and almost cheerful idyllic kind of setting only heightened the spooky happenings surrounding the story.

Adri: My second and last pick (because I need to step up my spooky reading game) is Spellbound by Jacqueline West. In terms of pacing between both books, the first in the series was like moving into the house, where as the second is like settling into the house—especially for Olive. It was kind of wild, and I can’t wait to get into The Second Spy, The Books of Elsewhere #3.

Breana: I have two more books to add to this list. The first is Mine by Delilah S. Dawson (find the review HERE). Mine was probably one of the eeriest books on my end of the list. From growing up to dealing with a frightening haunting in a house she didn’t want to be in—with parents who she was at odds with—the character, Lily, went through it. And my last pick is Dark Waters by Katherine Arden. My review for Dark Waters will be posted later this month. It was one of my favorite reads of the year so far, and it’s a fitting continuation of the story set up by Small Spaces and Dead Voices.

So that’s what we read this year. Thanks for stopping by. Happy reading!