ARC Review: What Lives in the Woods by Lindsay Currie 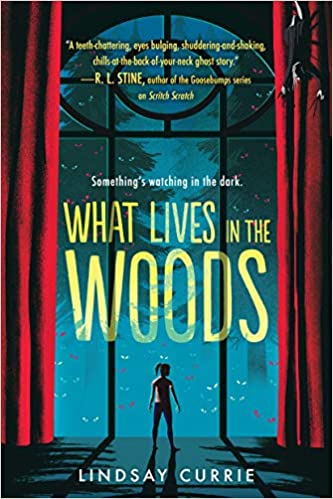 Welcome to the decrepit Woodmoor Manor…where something in the woods is always watching. From the author of Scritch Scratch comes a chilling middle grade story about a creepy mansion and sinister creatures in the woods...

All Ginny Anderson wants from her summer is to relax. But when Ginny's father—a respected restoration expert in Chicago—surprises the family with a month-long trip to Michigan, everything changes. They aren't staying in a hotel like most families would. No, they're staying in a mansion. A twenty-six room, century-old building surrounded by dense forest. Woodmoor Manor. Locals claim the surrounding woods are inhabited by mutated creatures that escaped a mad scientist over a hundred years ago. And some say campers routinely disappear never to be seen again. When the creaky floors and shadowy corners of the mansion seem to take on a life of their own, Ginny uncovers the wildest mystery of all: there's more than one legend roaming Saugatuck, Michigan, and they definitely aren't after campers. They're after her.

Last year, I read a number of really great middle grade ghost stories—or books with a spooky atmosphere—and that trend is still going strong in 2021. My first foray into this year’s releases was What Lives in the Woods by Lindsay Currie. I’ve been meaning to give this author a try since Scritch Scratch was released last year; however, it's still on my TBR list.

What Lives in the Woods was a spooky and fun book that had enough scares for readers to enjoy, while also having a surprisingly bittersweet yet heartwarming twist.

The story was just good. It was immediately engrossing, and the fantastical elements were one of the many high points about What Lives in the Woods. Part of that ambiance came from the setting. Woodmoor Manor was creepy. It had all the trappings ripe for mysterious happenings to occur: an isolated location, surrounded by a forest, and an antiqued aesthetic. In that regard, Currie did a great job developing the local lore surrounding the manor. Its mysterious and detailed history proved to be beneficial to the overall atmosphere, and it really was the perfect location for this story to take place.

Ginny Anderson was a great narrator. She knew what she wanted and wasn’t afraid to show her disappointment about the way her summer plans were abruptly changed. Yet, there was also the friendship in this story that she later developed. It started fast, but was written very well. The characters read like siblings or good friends.

Overall, What Lives in the Woods was a great read. This one is definitely for fans of India Hill Brown’s The Forgotten Girl and Katherine Arden’s Small Spaces and Dead Voices.

Lindsay Currie loves a great mystery, and is the author of a number of award-winning mystery books for young readers. Her titles include THE PECULIAR INCIDENT ON SHADY STREET (2017, S&S) and SCRITCH SCRATCH (2020, Sourcebooks Young Readers) and the forthcoming WHAT LIVES IN THE WOODS (2021, Sourcebooks Young Readers) and CURSES OF EASTPORT (2022, Sourcebooks Young Readers). Lindsay's debut middle grade (PECULIAR INCIDENT) has been to several print runs, was featured in TIME for Kids, was a final nominee for a children's book award in seven states, was an Amazon Prime Book Box pick, and continues the capture the hearts of young readers every single day. SCRITCH SCRATCH is following in those footsteps by going to a second print run only one short month after release, being one of only sixteen titles chosen for the national March Madness book event, and becoming an Amazon Book Box pick for April 2021. In addition, her books have all sold audio rights and foreign rights, as well as having earned a glowing blurb from the master of children's mystery/horror himself, R.L. Stine.

Disclaimer: This copy of the book was provided by the publisher (Source Books For Young Readers) via NetGalley for this review, thank you!