ARC Review: Fire & Ice, The Volcanoes of the Solar System by Natalie Starkey 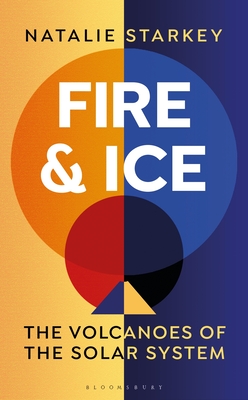 The volcano – among the most familiar and perhaps the most terrifying of all geological phenomena. However, Earth isn't the only planet to harbor volcanoes. In fact, the Solar System, and probably the entire Universe, is littered with them.

Our own Moon, which is now a dormant piece of rock, had lava flowing across its surface billions of years ago, while Mars can be credited with the largest volcano in the Solar System, Olympus Mons, which stands 25km high. While Mars's volcanoes are long dead, volcanic activity continues in almost every other corner of the Solar System, in the most unexpected of locations. We tend to think of Earth volcanoes as erupting hot, molten lava and emitting huge, billowing clouds of incandescent ash. However, it isn't necessarily the same across the rest of the Solar System. For a start, some volcanoes aren't even particularly hot. Those on Pluto, for example, erupt an icy slush of substances such as water, methane, nitrogen or ammonia, that freeze to form ice mountains as hard as rock. While others, like the volcanoes on one of Jupiter's moons, Io, erupt the hottest lavas in the Solar System onto a surface covered in a frosty coating of sulphur. Whether they are formed of fire or ice, volcanoes are of huge importance for scientists trying to picture the inner workings of a planet or moon. Volcanoes dredge up materials from the otherwise inaccessible depths and helpfully deliver them to the surface. The way in which they erupt, and the products they generate, can even help scientists ponder bigger questions on the possibility of life elsewhere in the Solar System.Fire and Ice is an exploration of the Solar System's volcanoes, from the highest peaks of Mars to the intensely inhospitable surface of Venus and the red-hot summits of Io, to the coldest, seemingly dormant icy carapaces of Enceladus and Europa, an unusual look at how these cosmic features are made, and whether such active planetary systems might host life.

No matter how many times I read about the Solar System, there’s always something new and fascinating to learn about it. I’ve read a few books before I finally settled on my latest read—Natalie Starkey’s Fire & Ice—and they felt more like a broad overview, sampling a wide variety of relevant subjects. Where Fire and Ice clearly narrows the scope, and focuses on geological activity in its many forms (i.e. volcanoes)—whether hot or cold—from around the solar systems.

This was, by far, an excellent read. I came away from the book with a better understanding, but also a desire to read further about the subject. Let me explain….

Fire and Ice was truly fascinating. Starkey attempts (successfully) to explain volcanoes on other planets and moons—as well as even smaller and colder objects floating around out there—through an in-depth explanation of the ones on Earth. It went over, in great detail, about everything from how dangerous and destructive volcanoes—and a host of other geological processes—can be, how they're “built,” but also acknowledged how formative and essential they are to the environment we’re currently enjoying.

Fire and Ice takes a tour around the Solar System, starting with the life supporting geological processes happening right at home. And how what’s currently known can give clues to how these distant worlds function. After reading this book, I have a new appreciation and respect for volcanoes.

Natalie Starkey is a geochemist and author. Following a PhD at Edinburgh University studying Arctic volcanoes, Natalie's post-doctoral work at The Open University shifted her research focus to comets and asteroids. She has analysed hundreds of pieces of stardust, samples from space missions to comets and asteroids, and many meteorites. Natalie has worked on samples from the NASA Stardust and JAXA Hayabusa missions and was a co-investigator on one of the ESA Rosetta lander instruments. Natalie's passion for her research makes her a keen science communicator. She received a British Science Association Media Fellowship in 2013 and a SEPnet media communications award the same year. Natalie is a science host on StarTalk Radio and her freelance writing includes work for the Guardian, The Conversation website, All About Space, BBC Science Focus and New Scientist. Natalie is currently an Outreach and Public Engagement Officer for Physical Sciences at The Open University in the UK.....

Disclaimer: This copy of the book was provided by the publisher (Bloomsbury Sigma) via NetGalley for this review, thank you!