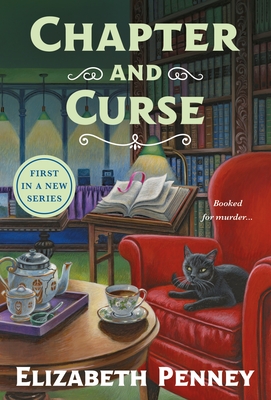 Elizabeth Penney's Chapter and Curse is the first in a brand new cozy series introducing Molly Kimball and set in one of the oldest bookshops in Cambridge, England...

I’ve been into mysteries lately, and my latest read was Chapter and Curse by Elizabeth Penney. I rarely catch the beginnings of cozy mystery series, but that hasn’t ever stopped my enjoyment of later books. Chapter and Curse is the beginning of a new series, and so far I like what I’ve read. From the charming setting to the loveable characters (and cats), there’s already a lot of promising aspects to the first foray into The Cambridge Bookshop series.

Chapter and Curse was quite the mystery. The story had a strong beginning, which laid the framework for the events to come while also introducing an eclectic cast of characters. There was everything from a big move to another country, some family drama involving shady relatives, a struggling bookstore, and a cat. Oh, and books. The story mainly takes place inside of a bookstore, so there was a strong literary theme.

Molly Kimball, the narrator, was awesome. In general, I liked her personality and the interactions she had with the other characters, namely her family and new neighbors.

Chapter and Curse was also the kind of story where the more you find out, the harder it is to guess what’ll happen. It seemed like a standard whodunit, but the delivery was what set this one apart. The situation just got more complicated as it went, with a lot of clues and too many suspects to count. I’m not being dramatic. That’s just an accurate description, because the victim of the case seemed to have run afoul of a number of people. All of them had an adequate motive to commit the crime. It could have been anyone, literally; although, at times it was hard to imagine it because much of the cast was so charming.

It was complicated, but it made for a great story. I really enjoyed Chapter and Curse, and I look forward to what’s in store for the characters next.

Elizabeth Penney is the author of the APRON SHOP SERIES and the forthcoming CAMBRIDGE BOOKSHOP SERIES for St. Martin’s Press. Elements that often appear in her novels include vintage summer cottages, past/present mysteries, and the arts. Elizabeth's writing credits include over thirty mysteries and women’s fiction novels, short stories, and hundreds of business articles. A former consultant and nonprofit executive, she holds a BS and an MBA. She's also written screenplays with her musician husband. She loves walking in the woods, kayaking on quiet ponds, trying new recipes, and feeding family and friends. Oh, and trying to grow things in the frozen North...

Disclaimer: this copy of the book was provided by the publisher (St. Martin's Press) via NetGalley for this review, thank you!