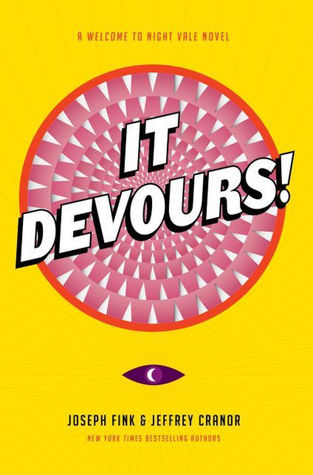 
From the authors of the New York Times bestselling novel Welcome to Night Vale and the creators of the #1 international podcast of the same name, comes a mystery exploring the intersections of faith and science, the growing relationship between two young people who want desperately to trust each other, and the terrifying, toothy power of the Smiling God.

Nilanjana Sikdar is an outsider to the town of Night Vale. Working for Carlos, the town’s top scientist, she relies on fact and logic as her guiding principles. But all of that is put into question when Carlos gives her a special assignment investigating a mysterious rumbling in the desert wasteland outside of town. This investigation leads her to the Joyous Congregation of the Smiling God, and to Darryl, one of its most committed members. Caught between her beliefs in the ultimate power of science and her growing attraction to Darryl, she begins to suspect the Congregation is planning a ritual that could threaten the lives of everyone in town. Nilanjana and Darryl must search for common ground between their very different world views as they are faced with the Congregation’s darkest and most terrible secret

“Not everyone believes in mountains, yet there they are, in plain sight.”

I’ve listened to the Welcome to Night Vale podcast on and off over the years, and I don’t know why I put off reading the novels for so long. I enjoyed It Devours!. It’s just like an episode of the podcast. There were a number of familiar faces—like Cecil Palmer, Carlos, and others. And while It Devours! is a book (with some illustrations, but it isn’t mixed-media; no interviews or transcripts, etc.), it’s told in a similar tone as the podcast that makes the weirder aspects of the town seem like normal, everyday occurrences—which for Night Vale it is. However, that’s part of Welcome to Night Vale’s charm, and I’m glad It Devours! captured some of that.

This book was something else. From the very first page, it starts out by saying not everyone believes in mountains, which is a pretty accurate example of the kind of logic that exists in Night Vale. Time behaved oddly. There were helicopters that didn’t run on fuel. And there’s even a house that’s there, but everyone says it doesn’t exist anyway. What’s causing the massive holes that are steadily devouring Night Vale? Who is Darryl? What is the Joyous Congregation of the Smiling God? Those are just some of the questions that needed to be answered, and how they were eventually explained was what I liked most about the book. As such, the mystery was great. I was drawn into the story from the very first chapter, and the villains were sufficiently creepy—yet unassuming at times—with the means and motivation to do what they did.

The majority of the story is told from the perspective of Nilanjana Sikdar. She has a job at Carlos’s lab, and most of her acquaintances are from said establishment. She’s competent in situations when she needs to be, and despite all that happens, she returns to habits from her daily life whenever she needs to solve something. Nilanjana pretty much embodied the feeling of moving to a new place, feeling like you don’t belong, and trying to find out where you fit anyway. I liked the moments when she began to accept Night Vale for the way it was, as well as how she navigated the situation with the mysterious holes.

I truly enjoyed It Devours!. I don’t think the series has to be read in order, especially if you’ve already listened to the podcast. That being said, I’m definitely going to read the first book in the series, Welcome to Night Vale: A Novel.