ARC Review: Word to the Wise by Jenn McKinlay 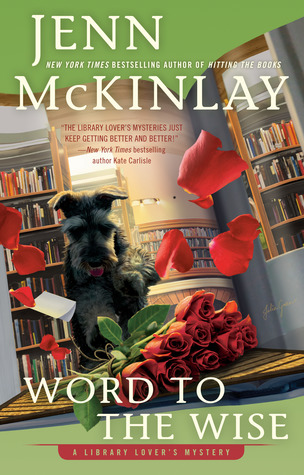 
It's no-holds-barred murder, in the latest page-turning Library Lover's Mystery from the New York Times bestselling author of Hitting the Books.

Lindsey Norris is finally getting married to the man of her dreams--but it's not all roses for Briar Creek's beloved library director, as gardening enthusiast and town newcomer Aaron Grady gives the term "book lover" a whole new meaning. Inappropriate looks and unwelcome late-night visits to Lindsey's house have everyone from the crafternooners to Lindsey's fiancé, Sully, on edge. When Grady's dead body is found staged outside the library and all the clues point to Sully, Lindsey knows it's up to her to dig through the hidden chapters of Grady's previous life to find the real culprit and clear Sully's name. But becoming a thorn in the killer's side is not without its consequences, and the closer Lindsey gets to the truth, the more determined the murderer is to make her just a footnote....

I’ve been looking forward to Jenn McKinlay’s follow-up to Hitting the Books since I read it last year. In Word to the Wise, some of the themes—like harassment and climate change—leaned toward the more timely side. McKinlay nailed the unusual weather patterns, enabling actions of others, the emotional toll, and the disconcerting characterization of characters like Aaron Grady. Because of that, there was an eerie—and sometimes exasperating—feel to the whole story. The mystery was anything but straight forward, and the twists were especially twisty in this one. As such, Word to the Wise was a page-turner. It also turned out to be one of my favorite installments in the Library Lover’s Mystery series.

At first, everything seemed great for Lindsey Norris. She had her job at the library. She was getting married to Sully. And I was happy about the development, because it meant that the romantic subplots of previous books were finally beginning to pay off for the characters. Plus, the stages of wedding preparation were fun, okay. However, once the mystery of who killed Aaron Grady began, some of that happiness evaporated. I liked the mystery here, because the suspects had sufficient motive to want Grady gone. He was a creep who used his reputation as an upstanding citizen as an excuse, a cover, to get away with harassment and stalker behavior. But, just like there was more to Grady, the mystery was also a complex issue. Nothing was as it seemed, and the twists kept coming.

The characters were as great as always. In particular, I liked the library staff who worked for Lindsey, as well as many of the other reoccurring characters. I liked the setting as well. Briar Creek is a small, idyllic coastal town: if you’re familiar with this series, then you know what it’s like, and there isn’t much more to say about it.

Overall, Word to the Wise was an excellent addition to the series. If you’ve read any of the previous books, then this one should be on your TBR List.

Jenn is the New York Times and USA Today bestselling author of several mystery series and will be debuting a new women's fiction series in June 2017, starting with the title About a Dog. She lives in sunny Arizona in a house that is overrun with kids, pets and her husband's guitars.

Disclaimer: This copy of the book was provided by First to Read for this review, thank you!