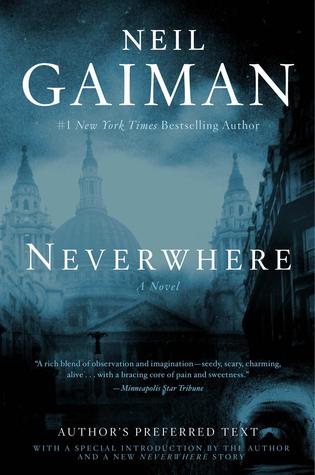 
Under the streets of London there's a place most people could never even dream of. A city of monsters and saints, murderers and angels, knights in armour and pale girls in black velvet. This is the city of the people who have fallen between the cracks. Richard Mayhew, a young businessman, is going to find out more than enough about this other London. A single act of kindness catapults him out of his workday existence and into a world that is at once eerily familiar and utterly bizarre. And a strange destiny awaits him down here, beneath his native city: Neverwhere....

Neverwhere is one of those books I kept saying I was going to read, but I never got around to it until now. The story was an excellent blend of a time period thoroughly entrenched in a modern time and fantasy elements. It was urban, gritty, and magical all at the same time. And it reminded me a little of Narnia and Alice in Wonderland. Although, it wasn’t a world at the back of a wardrobe, or an odd place following its own rules—or lack of rules—found at the bottom of a hole. No, Neverwhere was set in a place that was closer than anyone would have expected. It was another London, or as it was called in the story, London Below. There was so much I enjoyed about Neverwhere. I guess it was just my kind of story.

Richard Mayhew was a protagonist who, at first, lived a safe and comfortable life. He was a young businessman, and he was in a stable relationship with Jessica, his fiancée. That all changed when he met Door by chance one day. As the synopsis states “there are people who fall through the cracks,” and Richard does indeed become one of them. And when his good deed backfired on him, it was interesting how he handled himself now that his life was irrevocably changed for the worse. I liked the characters in Neverwhere. I don’t want to say too much about the secondary characters, but I have to at least mention Door. Door was a delightful character, and my only regret is that the rest of her family didn’t have a chance to appear on page. Door’s specific ability—a trait known to her family—was one of my favorite aspects about her character.

London Below was such a fascinating place to read about. Like Wonderland, London Below was a mysterious place that followed its own rules. There was a way of life down there, an order to things. So all manner of people and animals and monsters and angels—places seemingly outside of time or reality—existed right below the streets of London. I’m not going to lie, it was kind of awesome.

The story was great and atmospheric. There was action, and there was always a sense of danger to the situations the characters ended up in and the places they went. There was an element of cat-and-mouse to the story: a chase that spanned from the beginning to the end. Speaking of the end, it was open-ended in a way, but I was still satisfied with the conclusion of the story.

So far, Neverwhere is one of the best books I’ve read so far this year. And here I thought Coraline would be hard to beat as my favorite book by Gaiman, but I was wrong.