Review: The Case Study of Vanitas Volume #3 by Jun Mochizuki 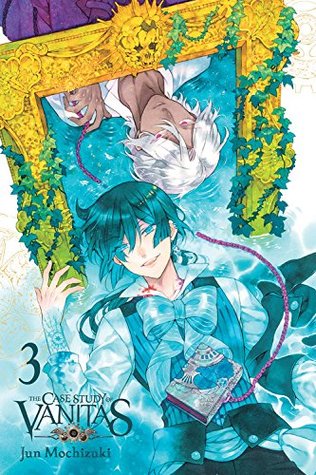 
The masked ball has ended, but the music plays on. As Noe and Vanitas return disgraced from Altus, the curtain rises on a new battle. News of kidnapped curse-bearers sends the pair to the catacombs beneath the streets of Paris, where a melody of intrigue echoes and a superhuman foe awaits! Humans or vampires: Who will be the hunter, and who the hunted?

**note: there are potential spoilers for volume 1-2, you’ve been warned…**
It’s been a minute since I last read one of the volumes in this series, and I was eager to pick it up again. Volume 3 starts with the end of the masquerade arc, and Mochizuki wasted no time in reminding readers that the story is being narrated by Noe. He’s the only character whose thoughts are ever really seen, and it’s clear that the events so far have already happened and are just being recounted. It is called The Case Study of Vanitas. However, the expressions of the characters in the story presently being shown, are telling enough. Besides it’s still an interesting story regardless.

I’m really into this series so far. With each volume, it seems like the story and the characters get a little more complex as more of the world is slowly revealed. For instance, the “Babel Incident,” keeps coming up. Like with everything else about the series so far, I feel like there’s more to the story than what’s currently being said. The same could be said about the characters. The motivation behind Vanitas’s actions remains pretty murky at this point. However, I do like his interactions with Noe. The two can at times act as a foil to each other, especially when their personalities lead to clashes.

I also enjoyed the part of the story that was spent in Altus, which is still one of my favorite locations in this series so far. Plus a little more of the vampire politics was discussed before the story moved on. Even though there were plenty of revelations and plot twists here, I still have a lot of questions regarding the truth of the situation with the curse-bearers.

Speaking of vampires, I continue to be fan of how they’re portrayed in The Case Study of Vanitas. Part of that is due to how powers are set up in this series. The action sequences are always great, and the art is consistently gorgeous. There was also, finally, a conflict where the world formula revisions were directly shown for more than a few panels (and by characters other than Vanitas). The uses seem to vary—like the ability of The Book of Vanitas, and how some vampires can create fire and others can create ice.

Volume 3 is also the beginning of the next arc, and it gets off to an exciting start. The Chasseurs (vampire hunters) were finally introduced in this volume, and I’m excited to see where that part of the story goes.

All-in-all, I’m having a lot of fun reading this series.