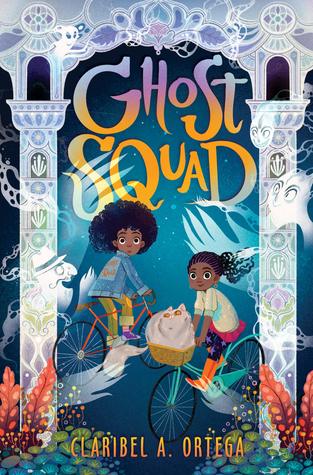 
Coco meets Stranger Things with a hint of Ghostbusters in this action-packed supernatural fantasy.... For Lucely Luna, ghosts are more than just the family business.

Shortly before Halloween, Lucely and her best friend, Syd, cast a spell that accidentally awakens malicious spirits, wreaking havoc throughout St. Augustine. Together, they must join forces with Syd's witch grandmother, Babette, and her tubby tabby, Chunk, to fight the haunting head-on and reverse the curse to save the town and Lucely's firefly spirits before it's too late. With the family dynamics of Coco and action-packed adventure of Ghostbusters, Claribel A. Ortega delivers both a thrillingly spooky and delightfully sweet debut novel.

I don’t know what it is with this trend of middle grade ghost stories, but I’ll take it. Ghost Squad, is just the latest book I’ve read that falls in line with this pattern, and I had a lot of fun reading this story.

Ghost Squad had a lot going for it. I like ghost stories, especially ones that are set during October, which is one of my favorite times of the year. From the start, I enjoyed Ortega’s take on ghosts and magic. There were a number of spooky and heartwarming moments in the story. The latter was particularly evident at the beginning with instances between the main character, Lucely Luna, her father, and the ghost (fireflies) of past relatives. The ghosts were fantastic. Their portrayal is one of the best I’ve read in middle grade fiction. I liked how there was a mixture of them with some of them being spooky/creepy while others were seemingly made of light. So Ortega did an excellent job of developing the magical aspects of the story.

I also enjoyed how the message and themes were explored in the book. Part of that was through Lucely’s connection to her family and friends. The portrayal of the platonic and familial bonds in Ghost Squad was not only excellent but they were also one of the highlights of the story. The same could be said about the rest of the colorful cast of characters. I really loved the friendship between Lucely and Syd. And among my top-favorite characters was Babette, Syd’s grandmother. She was such a fantastic character. She was stylish, and her personality was great. She and her cats—all named after characters from the Goonies—were entertaining. I also loved Lucely’s ghost relatives. They were wonderful characters.

As for the story, I liked it. There were a number of pop culture references, such as mention of characters from the Goonies.

I really enjoyed the book, and I will be looking forward to what Ortega writes next. As for recommendations, Ghost Squad is perfect for fans of The Forgotten Girl by India Hill Brown as well as Small Spaces and Dead Voices by Katherine Arden. But really, if you’re looking for a ghost story, then I’d recommend giving this one a try anyway.