Review: I Shall Wear Midnight by Terry Pratchett 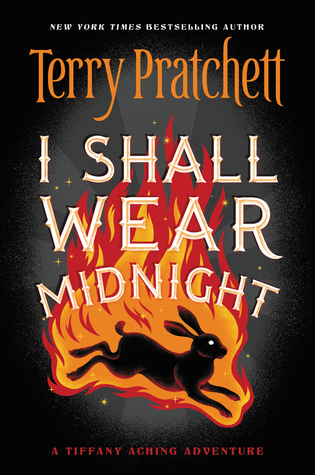 The fourth in a series of Discworld novels starring the young witch Tiffany Aching...

As the witch of the Chalk, Tiffany Aching performs the distinctly unglamorous work of caring for the needy. But someone—or something—is inciting fear, generating dark thoughts and angry murmurs against witches. Tiffany must find the source of unrest and defeat the evil at its root. Aided by the tiny-but-tough Wee Free Men, Tiffany faces a dire challenge, for if she falls, the whole Chalk falls with her. . . .

For the longest time, I have said I wanted to continue reading the Tiffany Aching series, since Wintersmith is one of my all-time favorite books. I have yet to read the first two books in the series, but I had no trouble stepping back into the somewhat silly but also serious/dangerous and magical world of Tiffany Aching. I was always curious to know what happened after the business with winter was over. So I have finally read Wintersmith’s sequel, I Shall Wear Midnight, and it was a fantastic read.

The beginning of I Shall Wear Midnight was almost calm by comparison to the later part of the story. Sure it was chaotic and busy, but it was all typical to witches in the Tiffany Aching series. That being so, once the fear, rumors, and anger towards the witches started, that calm vanished. There was a gradual build to the tension, which was only heightened as more and more of the twists—and ultimately the villain of the story—was revealed.

There is something so immersive and engrossing about this story. Part of it was the characters—or rather Tiffany Aching herself—as well as the role magic occupied within the story. Pratchett’s take on witchcraft can at times be pragmatic, but it’s one of my favorite versions. In Wintersmith, Tiffany was still learning how to be a witch, and as a consequence she was around other witches a lot more than she was here. In I Shall Wear Midnight, she was mostly on her own, in her “steading”—which is essentially the geological area a witch looks after. She had big shoes to fill, and as the story stresses: witches handle the unglamorous work, i.e. the tasks that may go unnoticed otherwise.

Tiffany is such a wonderful character. She went through quite a bit in this story, as relationships she had relied on and cherished were tested as often as they changed. In that way, I Shall Wear Midnight felt more like a coming of age tale, as Tiffany really stepped into her own and fortified her confidence and pride as a witch. It was great to see, and it kept me turning the pages. As always, Tiffany’s bond with the Nac Mac Feegle (Wee Free Men) was great. Some of their antics served as some much needed comedic moments in a story that was otherwise quite serious in tone.

I Shall Wear Midnight was a fitting sequel to Wintersmith. I’m glad I can finally mark this one off my TBR list, and I look forward to read more of Pratchett’s Discworld series.