ARC Review: Finished Off In Fondant by Rosemarie Ross 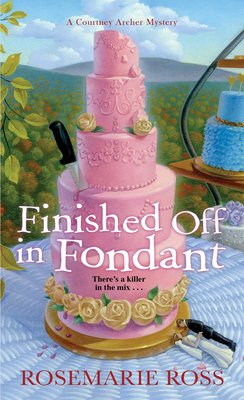 Hosting a reality cooking show could be the perfect career boost for Chef Courtney Archer--as long as the contestants aren't suspected of murder . . .

Despite a few early hiccups, Courtney is thrilled with her starring role on The American Baking Battle, filmed at a grand resort in the Pocono Mountains. The icing on the cake? The new season has a wedding theme--complete with formalwear. But the first day on set, the producer seems to care more about profits than pastry--and the topper comes when her cohost Skylar falls ill. Little does she know things are about to end in tiers . When a barely coherent, blood-covered Skylar is discovered at the doorway of his room, Courtney is horrified to walk inside and find a towering wedding cake--thoroughly smashed by the body of a woman in a bridal gown. Now suspicion is filling the studio and falling on Skylar, and Courtney has to look at coworkers and contestants, working through layers of deception to find the real culprit . . .

I liked the idea of Finished Off In Fondant, since it had a main character who was a host of a cooking competition as well as for her own show. It was a fun set up, and for the most part I did like the competition as well as the cooking aspects of the novel. I liked how much knowledge the character had about food, as it did come in handy. For the most part, I did like the cast of the characters. Courtney was interesting. Her situation was up-in-the-air for a while, as she had to come clean about her identity and the discrepancies of her on-air persona. So there was the possibility that her career could take a hit. So there was some tension in the story before the mystery began. I also liked the side characters. They were interesting in their own right.

Now when it came to the mystery—the very thing that hooked me from the start—at times it seemed to take a backseat to the filming of the competition, and the actual investigative portions seemed few and far in-between for much of the story. There was more speculation than anything else, and a lot of time was spent on other characters telling Courtney to mind her own business. That’s a common thing I’ve come across in most cozy mysteries I’ve read, and the characters always kind of disregarded that. However, Courtney did stumble onto some clues, but I wish the development of the mystery was more present than it was.

Overall, Finished Off In Fondant was fine.

About the author....
Rosemarie Ross is neither a chef, gourmet cook, nor television cooking star, but she loves watching them and turned that love into a cozy mystery series. Rosemarie Ross is also the pseudonym of multi-published author Rose Ross Zediker, who writes contemporary and historical inspirational romance novels.

Disclaimer: This copy of the book was provided by the publisher (Kensington) via Netgalley for this review, thank you!