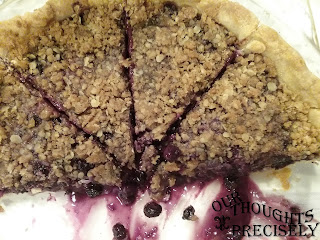 Hello readers! Today I’m going to talk about a new favorite recipe: blueberry pie. Today is also the anniversary of when we sat down and created Our Thoughts Precisely in the blog creation part of Blogger. That was in 2013. I really cannot believe it has been eight years already. Time sure does fly! Any way onto Our Favorite Recipes! 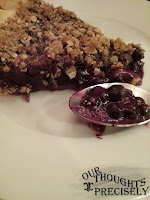 Around Thanksgiving 2020, Breana and I made the Butter Flakey Pie Crust by Melissa Stadler again (and our previous thoughts are here). This time we used milk and vinegar instead of water like we usually do. It came out great. However, by the time we finished pouring our sweet potato pie in, we discovered that we had no need for two crusts. For some reason, I started thinking about blueberry pie. I immediately went to find a recipe. I eventually found one with a crumb topping –my favorite! It is Blueberry Crumb Pie by Bethany Webber.
I made it according to the instructions. But, at the suggestions of the comments I decided to add cornstarch. A lot of commenters used between 1 and 3TBS, but I used about 3 ½. Additionally, I did not thaw my blue berries. Instead, I poured the filling in (it was kind of sandy), and shook the crumble over by the spoonful.
Ironically, what started with finding a way to use the last crust, ended with me having extra pie filling. Andrea mentioned cheesecake. And then I got an idea which ended up being the most recipe mixing I have ever done. In the mean time I put the pie in the oven. Later I had to add 10 minutes to my time because the center was still cold (maybe thawing would have helped it cooked faster?)
Of course I was out of a pie shell. So I had to make another one. This time, I made the crust from the Tasty 5 Minute Microwave Cheesecake recipe. (Off topic this recipe is pretty good, I’m pretty sure I modified it a tiny bit. I don’t remember what I did though; it’s been a long time since I made it.) I quadrupled the crust measurements to 8 graham crackers and 4 TBS of melted butter –which then became 5 because it still seemed dry. I added about ½ tsp of cinnamon too. I packed that into a parchment lined pie pan (honestly I just wanted a quick clean up). For the cheesecake, I made half of Philadelphia’s 3-step Cheesecake. I messed up and added the full ½ cup of sugar. I ended up adding sour cream and it balanced it out just fine. 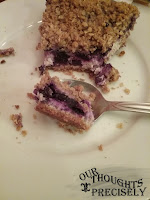 I added the cheesecake, and then the pie filling on top. By this time, the blueberries had started thawing and made the mixture thick like sludge. So, it ended up really heavy and swirled on top of the cheese cake. Finally I added the crumble. Since I was randomly doing this, I decided to change the temperature to 350°F. I figured this would be in between for the pie (375°F) and cheesecake (325°F).
And then everything was done. Except, in another twist, I still had extra crumb topping… Breana and I thought of making a plain cheese cake so we could be done. And eventually we did.
The blueberry pie was amazing. I think, in past post, I’ve mentioned desserts not being too sweet. Well, those are my favorite desserts, and that’s where this falls. The same thing for the cheesecake, the flavors melded nicely. Adding as much cornstarch as I did seems to make it thicken well. The only time it was slightly runny was when I cut it warm. After being in the refrigerator, it became stiff and no longer runny, at all.
Anyway that’s all. Whew, this one was a little longer than I’d usually write, but I wanted to be in-depth. Thanks for reading. What’s your favorite pie flavor?