ARC Review: You Can Never Tell by Sarah Warburton 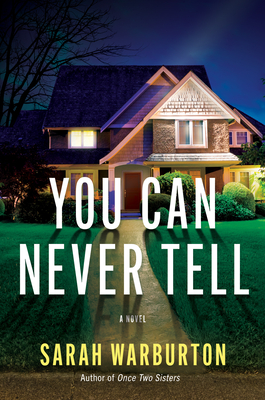 Perfect for fans of Liane Moriarty and Joshilyn Jackson, Sarah Warburton's chilling thriller, inspired by the Moors Murders, explores the twisted side of suburbia.

Framed for embezzlement by her best friend Aimee, museum curator Kacy Tremain and her husband Michael move from New Jersey to a charming Texas suburb to escape their past. Kacy quickly makes new friends--preppy, inscrutable Elizabeth, chatty yet evasive Rahmia, and red-headed, unapologetic Lena. But good friends aren't always what they seem. As she navigates the unexpectedly cutthroat social scene of her new town, Kacy begins to receive taunting postcards--and worse, discovers cameras hidden in the wall of her home. Lena and her husband, Brady, reassure her that the cameras are just relics of the paranoid previous homeowner . Once the cameras are removed and Kacy's fears are quelled, Kacy and Michael make the happy discovery that they are going to be new parents. Months after the birth of their daughter, Michael accidentally makes a shocking discovery about Brady's past. And when Lena suddenly goes missing, Kacy and Michael begin to uncover the truth about their neighbors--and it's more terrible than anyone could have imagined. Interlaced with transcripts of a chilling true crime podcast that follow the tangled threads of the drama, You Can Never Tell is a taut and complex psychological thriller that never lets up until its breathless conclusion.

In the beginning, Kacy still yearned for the life she’d had while working at the museum and living in New Jersey, and that could have been an interesting story in itself. Yet the focus of this book is on what happened afterwards. As the story went along, her priorities changed, and she stopped wondering about the “what ifs” and started living the life she had managed to build. Therapy was a part of her story. I also liked the roles of the supporting characters, as well as Kacy’s relationship with her husband, Michael.

A highlight of You Can Never Tell was the crime podcast transcripts included between chapters. The commentary of the hosts provided a different perspective on the events of the story outside of Kacy’s narration.

The story, in general, was a good one. And, even though you know who the killers are—because it’s very clear early on—it’s not a secret nor is it the sole driving force that kept me turning the pages of You Can Never Tell. Instead, what drives the story are the questions of “how did we get here,” “why,” and “how will it end.” That was the mystery and the suspense all at once, and Warburton did an excellent job on building a sense of dread and foreboding surrounding the events that happened to Kacy and her family—both before and during the present time in the story. It all spiraled into a satisfying conclusion.

Sarah D. Warburton lives in the mountains of Southwest Virginia. For ten years she was the lead writer for the monthly magazine UpClose. She has studied writing with Pam Houston at the Taos Writers Workshop and with Justin Cronin in Houston. Her work has appeared in the Southern Arts Journal, Women on Writing, Embark Literary Magazine, and Oyster River Pages. You can find her on Instagram as @sarahwarbutonauthor. She is represented by Melissa Jeglinski of the Knight Literary Agency. Her first novel, ONCE TWO SISTERS, was a Publishers Weekly pick of the week, a Crimereads recommended debut, and a PopSugar featured title. Her second novel, YOU CAN NEVER TELL, will be published August 2021 by Crooked Lane Books.

Disclaimer: This copy of the book was provided by the publisher (Crooked Lane Books) via Netgalley for this review, thank you!