The Friday 56 (172) & Book Beginnings: Gods of Jade and Shadow by Silvia Moreno-Garcia


The Mayan god of death sends a young woman on a harrowing, life-changing journey in this one-of-a-kind fairy tale inspired by Mexican folklore....

The Jazz Age is in full swing, but Casiopea Tun is too busy cleaning the floors of her wealthy grandfather’s house to listen to any fast tunes. Nevertheless, she dreams of a life far from her dusty small town in southern Mexico. A life she can call her own. Yet this new life seems as distant as the stars, until the day she finds a curious wooden box in her grandfather’s room. She opens it—and accidentally frees the spirit of the Mayan god of death, who requests her help in recovering his throne from his treacherous brother. Failure will mean Casiopea’s demise, but success could make her dreams come true. In the company of the strangely alluring god and armed with her wits, Casiopea begins an adventure that will take her on a cross-country odyssey from the jungles of Yucatán to the bright lights of Mexico City—and deep into the darkness of the Mayan underworld...

Beginning: "Some people are born under a lucky star, while others have their misfortune telegraphed by the position of the planets."

56: "Yes, it's magic and its blade were sharp. It would allow him to succeed a second time."

Comments: Gods of Jade and Shadow was the first book I read by Silvia Moreno-Garcia, and I really loved the story. What are you reading this week?

Email ThisBlogThis!Share to TwitterShare to FacebookShare to Pinterest
Labels: Book Beginnings, Gods of Jade and Shadow, Silvia Moreno-Garcia, The Friday 56

After finally watching The Dark Crystal—which I talked about HERE—I was more excited than ever to check out the other movie that I’ve heard a lot about. As the title of this post suggests, I watched Labyrinth in December 2019, and oh man, I totally get why this movie is mentioned so often. I certainly understand why it’s considered a fantasy classic. Narratively it was entertaining to watch, and combined with a great cast—David Bowie as Jereth the Goblin King, and Jennifer Connelly as Sarah Williams—excellent set and puppet design, there was a lot to like about Labyrinth. I thoroughly enjoyed it.

Labyrinth is the kind of story that’s part coming-of-age tale and also one about being careful what you wish for. That’s the lesson Sarah learns after she wishes her baby brother away, and oops…because someone was listening and had the power to grant it. I like these types of magical adventure films. There’s something campy and whimsical about them that draws me to them. Being a musical, Labyrinth had the leg-up on some of my other favorite films since David Bowie sings most of the songs. With Jim Henson company productions, I’m always in it for the puppets. One of my favorite aspects about the movie was in fact the puppets. There were so many, but each one was as detailed and unique as the last. The puppeteer work was just as great as it was in The Dark Crystal, and some of my personal favorite characters—such as Hoggle, Ludo, and Sir Didymus—were done so well.

There were so many areas to the labyrinth itself. From the castle looming in the distance, to the entrance—which was more like a standard maze and was a little empty and desolate, but definitely not lacking in the glitter department. The labyrinth was an interesting and ever changing setting, and the overall design of the film was one that I liked. It was dark where it was needed and lighter (or should I say whimsical?) where it needed to be with humor mixed in to break up some of the more serious aspects about the story.

All-in-all, I’m glad that I finally gave this movie a try.

Do you have any favorite classic fantasy movies? If so, leave your recommendations in the comments down below.

Breana: Recently, I have been trying to find new music to listen to. One of the best new-to-me-artists that I’ve come across so far is Kelsey Lu. The first song I listened to by Lu was Due West, and I quickly moved on and listened to her full length album, Blood. One of my favorite songs from it is Atlantic.

Adri: Breana really got me into Cirque Du Soleil's Volta album, and for the past week, I've been listening to To the Stars on repeat. So that's my pick for today.

Andrea: This week I'm listening to Blinding Lights by The Weeknd.

I am also listening to  RITMO (Bad Boys for Life) by The Black Eyed Peas featuring J Balvin.

There is always new music that we end up missing. So what are you listening to this week? 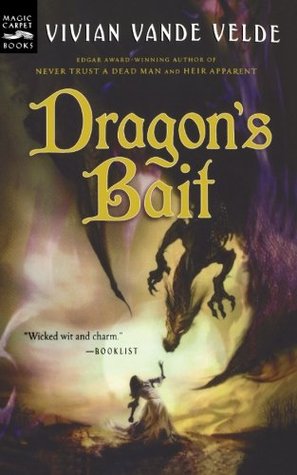 
Fifteen-year-old Alys is not a witch. But that doesn't matter--the villagers think she is and have staked her out on a hillside as a sacrifice to the local dragon. It's late, it's cold, and it's raining, and Alys can think of only one thing--revenge. But first she's got to escape, and even if she does, how can one girl possibly take on an entire town alone? Then the dragon arrives--a dragon that could quite possibly be the perfect ally. . . .

I first heard about Dragon’s Bait by Vivian Vande Velde when I read a review about it over on Purplereader’s blog. It sounded like an interesting story, and recently I was in the mood for a book featuring dragons and remembered this one. I liked Dragon’s Bait. The story was on the shorter side but it was an entertaining one; although, I will admit that I wish it had been a little longer. I would have liked to see more of the characters, more of the world…just more in general. That being said, Dragon’s Bait had a good amount of actual dragons present on the page, and I also liked the character arc of the main character, Alys. Alys was accused, tried, and convicted of being a witch. The charges were unfair and untrue, but Dragon’s Bait is a story about greed and revenge. I did enjoy how the book critiqued the trials as a whole, particularly about who would and wouldn’t be singled out with accusations of witchcraft. Overall, I liked Dragon’s Bait....

Breana: My pick this week is Sway With Me by Saweetie and GALXARA. Every new song I hear from Birds of Prey has me more and more excited for the movie and the album.

Adri: My pick for today is Nice to Meet Ya by Meghan Trainor featuring Nicki Minaj. The last time I mentioned Trainor in Music Monday was when her new album Treat Myself was suppose to be released. Well, plot twist, it was delayed. But it's out now and I love the album. There is also a Target exclusive CD, which you can find here.

Andrea: I saw Brian King Joseph preform three times live at America's Got Talent. He's such a phenomenal performer who’s in a league of his own. I'm ecstatic that he's released his first original song. I highly recommend his music, so take a listen to Spark below.

I’m looking forward to discovering what you're listening to. Have an amazing week!