When I originally thought of doing some kind of occasional weekend post, I already knew that it wasn’t going to be a weekly thing. It’s going to be, as I said above, occasional. All this post is about is the things I’m currently doing or maybe even look forward to. And at the very end I’ll name a place that I wish was a book setting and my choice of tea for the day. (Links for Weekend Tidbits can be found on the Features Page.)

Not much is really new besides the fact that I’ve done some baking, and I put together an interview that’s going to go up later in the month. Anyway, June 5th was National Doughnut day and instead of buying them, I decided to try a new recipe for making them. I have to say that I was really happy with the results—picture below. It was a vegan yeast doughnut made with coconut oil and coconut milk and I used the recipe from Spice Island Vegan, which you can view HERE 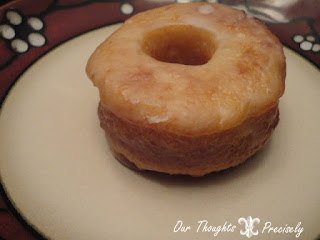 It tasted as delicious as it looks, and it was just like a normal doughnut. Although, I did cut back on how long I chilled it, it still came out perfectly.

Today's location is Mostar, Bosnia. Its a beautiful city and I don't have anything else to say about it. Like always, you can see today's location on the Places I Wish Were Book Settings pinterest board.

My choice of tea for today is Gingerbread, not to be mistaken as just ginger. Its similar, but it's different enough.