Weekend Tidbits {#10} So Much Stuff

Today, I have so much stuff to go over, hence the title of the post. It seemed only fitting since most of what I’m going to mention today is not specifically book related, and wouldn’t be a fit for Musing Monday.

Recently there has been a handful of trailer releases that have gotten me really excited for the sequels I’ve been waiting years for, which got me thinking about some of the other movies I’m waiting for.

Pirates of the Caribbean Dead Men Tell No Tale: It has been six years—SIX YEARS—since the last Pirates of the Caribbean movie. That’s a long time to wait, but from the look of the trailer, all that time seems to be worth it. This also appears to be the return of Will Turner and the Flying Dutchman, which is a decision I can totally get behind. I’m beyond excited for Dead Men Tell No Tales. I'm not going to lie, when I saw the “final adventure” part from the trailer, I was worried that this was going to be the last movie in the franchise. Thankfully, it isn’t. P.S. I still miss Tia Dalma. She will forever be my favorite character from Pirates of the Caribbean.

Wonder Woman & Justice League: I’m kind of curious to see how these movies turn out. Marvel is great, but I also like some of the stuff from DC too. My hopes are really high for Wonder Woman. Just from the trailers, it looks like it’s going to put some context to the picture of Wonder Woman from Batman V Superman. Then there’s Justice League, which is going to have The Flash, Cyborg, and Aquaman! I’m really looking forward to seeing those three characters as more than just cameo appearances.

Recently, I picked up two of the new Beauty and the Beast Funko Pops. I got Cogsworth and Mrs. Pots with Chip. I have to admit that these are probably three of my favorite funkos mainly because of the design of the characters. The colors are incredibly nice, and Cogswoth’s whole design is just awesome. 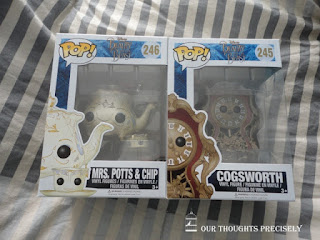 And last, but certainly not least, I have a recipe I want to share. This is one of my favorites. I’ve made it multiple ways, and can confirm that it turns out great each and every time. Do you need a recipe for flaky biscuits, you know, the ones with all those layers? I have found my go-to recipe:

I use this one whenever I make biscuits, and I’ve made it a number of ways. I’ve used regular milk, almond milk, wheat flour, or a combination of wheat & unbleached, or wheat & all-purpose. It just works great. The ones pictured below were made with half whole wheat & half all-purpose flour, and buttermilk. 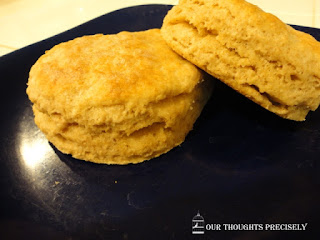