ARC Review: It's Beginning To Look A Lot Like Murder by Maria DiRico 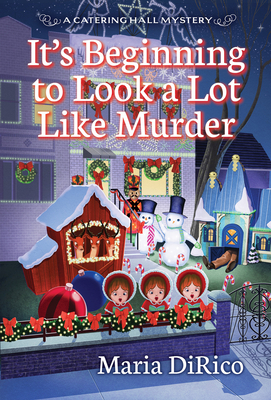 Astoria, Queens, is decorated within an inch of its life for the Christmas season, and Mia Carina is juggling her job at the Belle View catering hall with a case of murder...

Mia's busy with a full schedule of events at the family business--among them an over-the-top Nativity-themed first birthday party and a Sweet Sixteen for a teen drama queen. But her personal life is even more challenging. Her estranged mother has returned--and her lifelong friend Jamie has discovered a shocking secret about his past. He's so angry that he starts hanging out with Lorenzo, who claims to be his long-lost brother--even after it becomes clear that Lorenzo's story is as fake as a plastic Christmas tree. Then a body turns up among the elves in a Santa's-workshop lawn display, and amateur sleuth Mia has a buffet of suspects to choose from. Amid the holiday celebrations, she intends to find out who's the guilty party...

After a recent DNF, I was looking for a different cozy mystery to read—and to get back on track with—and so I settled on It’s Beginning to Look a Lot Like Murder by Maria DiRico. It’s a little earlier than I would typically pick up a holiday themed book (which I’m more inclined to do during November and December), but after reading the synopsis I couldn’t resist. This is the third book in the Catering Hall series, and it turned out to be the perfect combination of whodunit murder mystery, family drama, and holiday mayhem.

Right from the beginning, DiRico set up a festive atmosphere with descriptions of the snow and the holiday decorations—alongside the sometimes heated competition between the different blocks and neighbors, to see who has the best light display. I enjoyed the urban setting, as well as the catering hall end of the story. That is to say: the book was just good. The buildup to the introduction of the mystery has to be one of my favorites. The main players were tactfully introduced alongside the opening conflict and reoccurring characters in the series. And, overall, it was done well. Coupled with the sleuthing portions of the story and the amount of high stakes action, It’s Beginning to Look a Lot Like Murder had plenty to offer.

Beside the holiday festivities and overall mystery, the other highlights were the characters. They were exceptionally good, and there were a lot of big personalities. One of my favorite aspects of the story was the emphasis on family, in particular Mia and her relatives. They were well-written, and despite their faults and disagreements, there was no question about the close bond they shared. I could also say the same about the secondary characters. They were just as great as Mia, and for a few of them they often felt like extended members of the MCs family.

So while it’s not quite the winter holiday rush just yet, It’s Beginning to Look a Lot Like Murder was an excellent story and great preamble to the upcoming season’s offerings on the cozy mystery front.

Maria DiRico (the pen name of award-winning author Ellen Byron) was born in Queens, New York, and raised in Queens and Westchester County. She is first-generation Italian American on her mother’s side. On her father’s side, her grandfather was a low-level Jewish mobster who disappeared in 1933 under mysterious circumstances. While growing up in Queens, Maria/Ellen's cousins ran the Astoria Manor and Grand Bay Marina catering halls. As Ellen Byron, her Cajun Country Mysteries have won the Agatha award for Best Contemporary Novel and multiple Lefty awards for Best Humorous Mystery. Her new Catering Hall Mystery series, written as Maria DiRico, launched with Here Comes the Body, and was inspired by her real life. Ellen is an award-winning playwright, and non-award-winning TV writer of comedies like WINGS, JUST SHOOT ME, and FAIRLY ODD PARENTS. She has written over two hundred articles for national magazines but considers her most impressive credit working as a cater-waiter for Martha Stewart.

Disclaimer: this copy of the book was provided by the publisher (Kensington Publishing) via NetGalley for this review, thank you!