I'm writing this post just to let you guys know that this week is going to be really slow here at Our Thoughts Precisely. I'm not sure if I'm going to be posting anything for the next few days, but I will be back next week. I will still make the occasional post on twitter, tumblr, & pinterest during this week. Thanks for stopping by!

Our Thoughts Precisely is turning 2!

I’m just going to jump right into this. Our Thoughts Precisely started on March 15, 2013 so today officially makes the blog two years old. Hooray! We don’t have anything planned for today except for the new header which should be up some time today, but other than that, yeah, the blog turned two. As for the design of the blog, not everything is changing—some things sooner than others, other designs won’t be changing at all.

Other places where you can find us online…
So yeah, that’s basically it. Thank you to the readers that have stuck around with us these past two years, and we look forward to having another great year. Happy reading!

It appears to be that time again, Our Thoughts Precisely is receiving a bit of an update. (Just a new background & header, nothing big.) I wanted to go for something a little brighter this time. So, after 1 & 1/2 days of coming up with a concept and working on it until I liked it enough to consider it for a new header, here it is!!!
Posted by Breana M. at 6:57 PM No comments: Links to this post

Have You Heard of Sybil Ludington?

While this subject has nothing to do with YA or MG books, but I wanted to share it anyway.

Do you recognize the name in the title of this post? I admit that at first I didn’t even know who was being mentioned. Despite history being one of my favorite subjects, I admit that I never even heard of Sybil Ludington until I happened to be watching a show about historical monuments in America last night. I’ve read numerous history books, seen countless shows on the Revolutionary War, and yet, none of them ever mentioned Sybil Ludington and what she did. We all know the story with Paul Revere and his famous night ride on April 18, 1775 because of its historic importance.

So, have you heard about the second night ride in 1777? That’s right, Sybil Ludington was only 16 years old at the time, and traveled the dangerous road alone to alert the colonial militia. Did you see her age? Yeah, a 16 year old girl traveling alone through a forest at night during that time took some serious bravery. From what I know, she only had a stick with her that she used to knock on doors, and even her statue near Lake Gleneida in Carmel, New York is holding a stick. But the most noticeable thing about her night ride was the distance. No, it wasn’t 12 miles, or 18, or even 25, it was a whopping 40 mile ride. 40 MILES. That’s insane especially on horseback during the dead of night. The difference in distances is relatively substantial.

So I was left wondering why many of the history books, and TV shows about the Revolutionary War never bothered to mention Sybil’s ride to warn the militia that Danbury, Connecticut was under attack by the British. Ok, so I guess I'll stop with the history lesson, but if you want to read a little more about Sybil feel free to follow the links below:

So tell me, have you heard of Sybil Ludington before? Or is this the first time you’re hearing about her?
Posted by Breana M. at 3:59 PM No comments: Links to this post

From the Our Thoughts Precisely Team

Things have gotten a little sparse around here again, but it's not without reason this time. As the title of the post suggests, we've got to take a break from blogging, because you know life sometimes gets in the way of things. It happens. Basically we're moving and I don't mean the blog.  And with the move means soon we're going to have a lack of internet connection, and little time to read. I know we've got stuff to do, reviews to write, and so on, but this hiatus is pretty inevitable at this point. (Things moved along quicker than we thought.) But we'll be back up as soon as things are settled and more or less organized again. (Those books don't unpack themselves you know.) This is just to let you guys know that we're not quitting, or disappearing, but rather going on a hiatus for the time being, but don't fret we'll be back soon. And so now we're off, but we leave you with a shiny new poll on the side of the blog.

Posted by Breana M. at 8:35 PM No comments: Links to this post

And the Winner is...

Amidst a busy week we've got a winner to announce for our Fire & Flood Giveaway! So, without further ado the winner is...

Congrats Samantha, expect an email from us soon.
Posted by Breana M. at 4:30 PM No comments: Links to this post 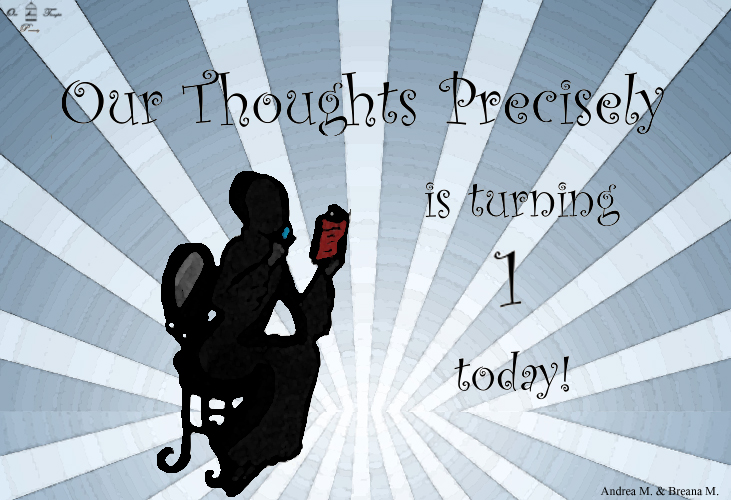 Yep, that little picture above tells the truth and nothing but the truth. Our Thoughts Precisely turns 1 today! Can you believe it? A whole year of blogging down the drain already. So, let me start off by thanking all of the readers who have stuck around this long. Time really does fly when you're blogging. It's been fun discovering authors and books I never would have thought about reading. There have been ups and there have been downs, but to say the least, its been an interesting year.
So to say thank you to our followers and celebrate Our Thoughts Precisely's blogiversary, we've got something to give away. So below you'll find a Rafflecopter widget where you can enter to win a Kindle copy of Victoria Scott's latest YA novel, which I absolutely  loved & reviewed not that long ago: Fire & Flood. The giveaway will run from today, March 15th, to March 22nd. Winner will be announced some time shortly after.


The Fine Print:
US only
Entrants must be 16 years of age or older, or have permission from a parent or guardian to enter
You must be a follower of the blog (email, Bloglovin, or GFC)
One entry per household
All entries will be verified, failure to follow the rules will disqualify all of your entries
Must be able to accept Kindle books
Void where prohibited
Now, go forth and enter!

And the Winner is...

And so the giveaway is over already, and one lucky person will be walking away with a book.  So without further ado the winner of the finished copy of Killer Frost by Jennifer Estep is...

Congrats Lori, expect an email from us soon.

Posted by Breana M. at 2:13 PM No comments: Links to this post

There's a new Places I Wish Were Book Settings post, over on Tumblr today. Link below:

CLICK HERE
So tell me, what place in the world do you wish was a book setting?

Posted by Breana M. at 1:36 PM No comments: Links to this post

Hello, it seems to be that time again. While not everything will be changing, the header has received a bit of a redesign, blue, with a birdcage and a bird. I mean, it has to have a bird right? Right? Ok, anyway, the rating art you can find at the bottom of most posts, specifically reviews, has also changed…drastically.  But in my defense the tree didn’t really fit much with the newish theme—sorry tree, you have served me well.  Anyhow, I thought a key, kind of vintage in style, would fit a little better.  The new rating art can be found on the about page.  So, pardon us while we tinker with the blog…
Posted by Breana M. at 8:16 PM No comments: Links to this post

Now, 2013 wasn't all bad, amidst all the misses there have been some really great hits.  Such as the books listed below:
Double Vision: Code Name 711 by F.T. Bradley
The Rithmatist by BrandonSanderson
Ink by Amanda Sun
Curtsies and Conspiracies by Gail Carriger
Midnight Frost & Spartan Frost by Jennifer Estep
The Tragedy Paper by Elizabeth Laban
This is what Happy Looks Like by Jennifer E. Smith
Sky Jumpers by Peggy Eddleman
A Tale of Two Centuries by Rachel Harris
Blurred by Tara Fuller
The Summer I Became a Nerd by Leah Rae Miller
The Hero's Guide to Storming the Castle by Christopher Healy
Pivot Point by Kasie West
Hiding out at the Pancake Palace by Nan Marino
The Collector by Victoria Scott
Mila 2.0 by Debra Driza
The Seven Swords by Nils Johnson-Shelton
Scarlet by Marissa Meyer
I'm sure I missed a few, but you get the point.  So, what were your favorite books of 2013?
Posted by Breana M. at 9:00 AM No comments: Links to this post

Email ThisBlogThis!Share to TwitterShare to FacebookShare to Pinterest
Labels: books, Random, What we liked in 2013

Today we're working on updating the blog background and header.  Some things may or may not work during that time.  So, um yeah, that's all I really had to say.

*Update
Ok that went a whole lot quicker than I thought it would.  Well here it is, the new look for Our Thoughts Precisely!  It's not as plain as the old version and I like the fact that it has more color to it.  So tell me, what do you think?
Posted by Breana M. at 12:31 PM No comments: Links to this post