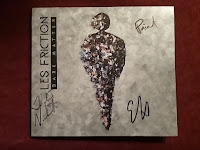 I first heard of Les Friction in an epic music compilation. This was a few years ago when I first began listening to this genre of music. Like any music junkie, I’ve checked to see if new music was on the horizon. My day lit up when I saw the tweet announcing Dark Matter was coming out.

Not only did this album meet my expectations, it exceeded them. Every millisecond is perfect, starting with Your World Will Fail. This song starts calm and then changes about midway. At this point it morphs into something more, resulting in a pleasant mix of instrumentals and vocals. Other songs including Who Will Save You Now, Dark Matter, and Firewall seems to follow this pattern somewhat too. Obviously, like any album, Dark Matter has calm moments too. I Remember and You Always Knew add a touch of sincere tranquility. These two duets with Emily Valentine and Laura Fabian, respectively, occasionally misted my eyes. The album ended with Kashmir (which is a cover of a song by Led Zeppelin); the only thing I can say is that it is the perfect way to end an album.

Due to the fact that each track was diverse in sound and lyric, the whole album maintained a certain aesthetic. Not one felt out of place. Actually, a host of emotions were elicited as I listened to each song. I’m not even sure they are nameble. To put it simply, it’s like finding that perfectly tailored dress. I love it!

I recieved this CD from Les Fricition for this review.