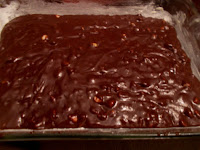 Oh yes, it’s time for another Favorite Recipe. This time, it’s brownies. Yes, rich, chocolatey brownies. Just a quick note: the pictures for this post were collected over time thus the plates don't match. I’ve made brownies all sorts of ways including from the box. I've also made them from scratch using a different recipe than the one I’m going to talk about today. I’ve had all kinds of results, including one unfortunate batch that was too much like particularly dry chocolate cake, i.e. not like a brownie at all. So, I have been on that quest to find the perfect brownie recipe, and to date I think this one is the best I’ve tried. The recipe I’m talking about is this one: Mmm-Mmm Better Brownies. (Pictured to the right is a double batch in a 9x13 inch pan before baking.)

When I say I love this recipe, I’m not kidding. It’s a huge hit in my house. There is nothing cakey about these brownies. They’re perfectly moist and fudgy, and the top and edges form this crispy layer. Don’t get me wrong, this isn’t the kind of dreaded crispiness you get from burning the brownies. No, this is the kind of crispy layer that you actually want on your brownie—hence, why I always go for one of the corner pieces. But it’s not just the texture that I’m a fan of, the flavor is just as good. It’s really chocolatey! The flavor reminds me more of dark chocolate—so, sweet, but with just a hint of bitterness. That’s what I like about dark chocolate anyway, so the flavor is right up my alley. (Pictured to the left is the double batch in the 9x13 inch pan after baking.) 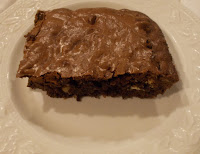 Speaking of flavor, I can’t forget to talk about the extra things I’ve added into the batter. Per the recipe, walnuts are optional, but I actually prefer these brownies with them. However, leave them out if you have a nut allergy. Pictured below is the result I got when adding chopped walnuts and white chocolate chips to the batter before baking. I prefer to mix the extra ingredients into the batter rather than sprinkling them on top, because I feel like it’s evenly distributed throughout the entire batch of brownies. Of course, you could really add anything you want into it, like M&Ms, things like that. 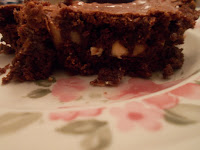 My only other recommendation is: double the recipe (which makes enough for a 9x13 inch pan instead of just a 9x9 inch pan), especially if you’re making these brownies for more than just yourself. (Pictured to the left is a closeup of a piece of walnut and white chocolate chip brownie.)

What about you? What’s your go-to brownie recipe?