That Time We Went To Coolirpa's 1 Million Subscriber Celebration...

It just occured to me now that I haven’t actually written any event recaps for this blog—Adri wrote briefly about when she went to see a live taping of a few upcoming episodes of Marlon. So, to keep it organized I’ve thought of a few questions for Adri and me to answer about the experience we had at the event.

For those of you who haven’t heard of her, Coolirpa is a youtuber who takes thrift store finds and literally gives them a new lease on life. Her designs are cool, and I highly recommend checking out her videos (Click here to get to her channel). You can also find her on Facebook, Instagram, and Twitter. Recently, Coolirpa’s youtube channel reached 1 million subscribers, and she hosted an event to celebrate. Even though the event has been over for a while, you can still check out its webpage here: Coolirpax1Mil.

What were you overall thoughts about the experience you had at the event?

Breana: This was truly a family friendly event. I went with my mom and sister, and we had a great time. There was music provided by a DJ. There were also a couple of cool things to do like: getting a necklace made; and drawing fashion sketches and distressing denim with instruction.

Adri: It was pretty fun there, and I enjoyed the drawing station. Overall, this was one of the most positive events I have gone to.

What did you think about the venue?

Breana: I thought the venue was pretty nice. It was hot on Saturday, June 17th, but it was nice since you could step into the mall and cool down for a few minutes. Also, there were benches around the fountain, so there were plenty of places to sit. I thought the event was set up in a good way, because there was space to walk around and check out all the booths with enough places to stand and watch the fashion show from almost every angle. Adri, what did you think of it?

Adri: I agree with everything Breana said. I have to add, it was nice having an event like this in Temecula.

What about the food?

Breana: I loved the free samples. The salad samples they were giving out happened to be the perfect thing to eat on a hot day. There were also cupcakes from Truly Madly Sweetly being given out. I know that it’s a bakery in my area, but I’ve never actually been to it before. However, after tasting one of their cupcakes at the event (chocolate cupcake with chocolate and vanilla swirl frosting), I definitely want to go back and see what else the bakery has to offer. Another thing I thought was great were the drinks. There were a lot of them. Between samples and unlimited lemonade, there were plenty of options to stay hydrated. However, my favorite drink was actually the Suja Strawberry Balsamic Drinking Vinegar. Honestly, I wasn’t sure if I was going to like it, but I enjoyed it as much if not more than the lemonade. I think it had more to do with the fact that I don’t really like to drink sugary drinks when it’s hot like that, so, that’s probably why I found the drinking vinegar extremely refreshing.

Adri: I also tried the Drinking Vinegar. I wasn't sure about the taste, but now, I feel the need to buy more. The cupcake I had was like a vanilla cupcake that kind of tasted like cream cheese. I'm not sure which part of the cupcake the cream cheese taste came from—it could have been the cupcake or the frosting. The color of the frosting was pink and cream colored. I couldn't tell where the flavors were coming from, but it was the perfect combination between cream cheese, strawberry, and vanilla.

Breana: The cupcake you tried sounds delicious too.

What was your favorite part of the event?

Breana: The whole fashion show was a lot of fun to watch. There were so many cool and creative designs including prom dresses made by students from a local high school. However, I think my favorite part was to be getting to see Coolirpa’s designs on the runway. I’ve seen them in her videos, but they’re even prettier in person. My second favorite part was the people. They were super friendly, and the atmosphere was lively. And of course, I can’t forget the photo booth. The photo booth was also a lot of fun, and I thought it was cool that they printed the pictures with a cute border customized for the event. (Pictured to the left is a picture I took during the fashion show.)

Adri: My favorite part was Everything! Clothing transformations, giveaways, and food. What else can I say?

What are your thoughts about the T-shirt and swag bags? Breana: To get this, you had to RSVP before the event, and I’m glad we did because this has to be one of my favorite swag bags, ever. The passion planner is probably my favorite thing—second only to the adorable Snoopy airplane snow globe. (Pictured to the right is what was in the swag bag including the T-shirt I got.) Adri, what did you think of the swag bags?


Adri: Although I liked everything in the swag bag I really like both the scissors and the nail polish. I like the scissors because they are easier to take my hand sewing on the go. As for the nail polish, it is LA Colors Color Craze, in the color cocktail (542) and is glittery. It is a little lighter than portrayed in the picture, but it dries well. Compared to other cheap glittery nail polish I have tried this one drives smooth rather than textured. 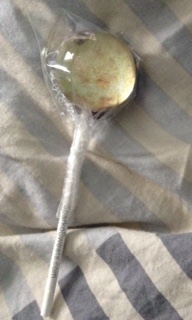 Breana: Oh, I almost forgot about the scissors. I occasionally do embroidery, and my current pair of scissors don't work well for anything other than paper. The ones we got in the swag bags actually cut the floss really well. So, I'm going to get a lot of use out of them.

Adri: Finally, I want to mention the Galaxy Lollipop by Sparko Sweets. Like the cupcake, I couldn't distinguish the flavor between the two sides of the lollipop. But, it tasted really good, it wasn't too sweet, and it had a really smooth texture and flavor.

Breana: I can't believe I forgot about the Galaxy Lollipop. I pretty much agree with everything you said about it and would consider buying more, since they have a lot of different flavors.

Have you gone to any interesting events this summer?