Review: The Return of the King by J.R.R. Tolkien 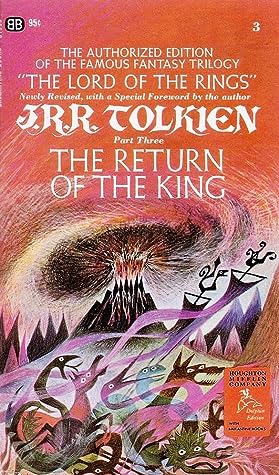 In the third volume of The Lord of the Rings trilogy the good and evil forces join battle, and we see that the triumph of good is not absolute. The Third Age of Middle-earth ends, and the age of the dominion of Men begins.

I haven’t read The Hobbit. But, I can finally mark The Lord of the Rings from my TBR list, because I have, at last, read The Return of the King. As a whole, this was a long but great story about the struggle against an evil so large it was the stuff of legends, as well as the cost of war on a large but also personal scale.

In The Return of the King, all the threads that were laid in the first two parts of the story came together for an epic confrontation that not everyone made it through. There was a moment of calm early on, but the tension was high. It was the proverbial calm before the storm, and once the story and action got going, it never seemed to stop. The character arcs came to a satisfying conclusion, and it seemed like everyone ended up where they were meant to.

I’ve known about the discussions surrounding the overarching themes of the story, even before I sat down to finally read The Lord of the Rings. Even so, the point of Frodo’s journey—and the way it came to its eventual conclusion—was done so well. The ending was achingly bittersweet, and yet it was a fitting final chapter to bring this story to a close.

Email ThisBlogThis!Share to TwitterShare to FacebookShare to Pinterest
Labels: five birdcages, J.R.R. Tolkien, purchased, Review, The Lord of the Rings, The Return of the King