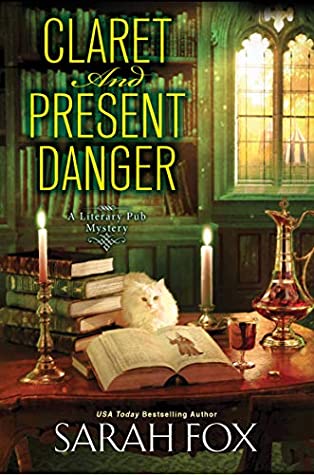 The Trueheart Renaissance Faire and Circus has rolled into town, attracting locals who can’t wait to spend a few summer days lost in a whimsical world of all-knowing fortune tellers and daring acrobats. Well-read pub owner Sadie Coleman is swept up in the magic herself when she serves drinks to the faire’s resident wizard, the shamelessly brazen illusionist Ozzie Stone, and scores two tickets to his opening performance. Sadie has no complaints about indulging in a free show with her new beau, craft brewery owner Grayson Blake. But while Ozzie is an instant crowd pleaser, the real surprise comes when he collapses in the middle of his set. It’s not part of the act—Ozzie is dead, seemingly poisoned by someone who wasn’t clowning around about writing the roguish showman’s final chapter. The terrifying situation intensifies when the police eye one of Sadie’s employees, last seen caught in a suspicious fist fight at the fairground. With so much at stake, Sadie must strain through a suspect list longer than her cocktail menu to find the real knave of a killer. But when another performer is murdered, it becomes clear that bringing the mixed-up murderer to justice will be about as dangerous as walking the high wire after happy hour…

I’ve seen the Literary Pub Mystery books around and was excited to read Claret and Present Danger, the fourth installment in the series. I was drawn in by the summary and intrigued by the renaissance faire and circus that was going to be at the center of the latest mystery in Shady Creek, Vermont.

Overall, I liked the story. The issues I had with it were few and mainly personal, otherwise it was a good book. Some of my favorite aspects turned out to be the faire—with the characters in costume and reciting lines. It provided a handful of moments of much needed fun (no matter how temporary) in a story that was otherwise pretty somber in content.

I also liked the characters and some of the other key locations in the story, such as the literary themed pub the main character, Sadie Coleman, owned and operated in the small scenic town. I really liked the pub’s aesthetic, and I got all the little literary references sprinkled throughout the menu. Speaking of Sadie Coleman, I liked her well enough. She was loyal and willing to help out an employee of her pub when he landed in hot water, and I liked the way her relationship with her boyfriend gradually developed. I also liked the secondary cast as well, and their presence helped drive home that the immediate community Sadie lived in was pretty close-knit.

As for the mystery, it was fine. Ozzie Stone seemed to be good at his job as well as being generally liked, but there were a lot of secrets to uncover. His were only the beginning of the tangled web that would ultimately be brought to light in Claret and Present Danger.

Sarah Fox, writer of cozy mysteries, was born and raised in Vancouver, British Columbia, where she developed a love for mysteries at a young age. When not writing novels or working as a legal writer she is often reading her way through a stack of books or spending time outdoors with her English Springer Spaniel. Sarah is the author of the Literary Pub Mysteries, the Pancake House Mysteries, and the Music Lover's Mysteries.

Disclaimer: this copy of the book was provided by the publisher (Kensington) via NetGalley for this review, thank you!