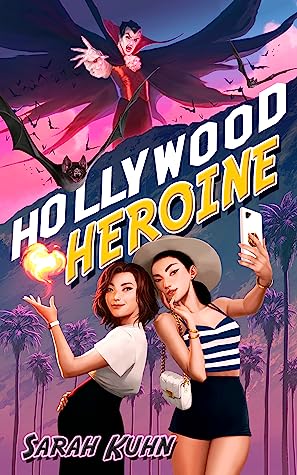 The fifth book in the smart, snarky, and action-packed Heroine series continues the adventures of Asian-American superheroines Evie Tanaka, Aveda Jupiter, and Bea Tanaka in a demon-infested San Francisco.

Over the years, the adventures of superheroines Aveda Jupiter and Evie Tanaka have become the stuff of legend--and now they'll be immortalized in their very own TV show! The pair head to LA for filming, but Aveda struggles to get truly excited. Instead, she's preoccupied wondering about the fate of the world and her role in it. You know, the usual. Now that Otherworld activity has been detected outside the Bay Area, Aveda can't help but wonder if the demon threat will ever be eradicated. When the drama on set takes a turn for the supernatural, Evie and Aveda must balance their celebrity commitments with donning their superhero capes again to investigate. And when the evil they battle reveals a larger, more nefarious plot, it's time for the indomitable Aveda Jupiter to rise to the occasion and become the leader she was meant to be on a more global scale--and hopefully keep some semblance of a personal life while doing so.

Note: there are potential spoilers for the first four books. You have been warned…

I’m always excited to see that there’s a new release for the Heroine Complex series, because I’m always up for another adventure with Evie, Aveda, and the others. I had very high hopes for this one. The thing with long-running series is they can get even better and better, or they could do the opposite. And I have to say that Hollywood Heroine was another great installment in the series.

This book again took the cast out of San Francisco, and this time, they landed in L.A. for the filming of a show that was purportedly based on their superhero exploits. What followed was a fast paced adventure as Evie and Aveda tried to figure out if their suspicions were because of the change of pace or if they had any supernatural meaning. The conflict with the demons remains an ever evolving situation, especially since their appearances have begun to spread outside of San Francisco. It’s still one of my favorite takes on superpowers.

Besides the fantastical elements, this story was very much about the identity of the two main leads. It’s been one of the reoccurring themes of the series since the beginning, but I feel like Kuhn really decided to home-in on it and do a deeper dive into Aveda’s time when she was just beginning to build her reputation. It was a part of the story that Evie wasn’t there for, and I really appreciated a resolution on that end, particularly between Aveda and Mercedes. The cast was just as lovable as always though, and, despite this being the fifth book, there was still room for growth and change amongst the dynamics of the team.

The mix of personal conflicts and the ensuing problem also at the heart of the mystery surrounding the events of Hollywood Heroine, made for a fun and action-packed adventure. All that to say: it really was great to have another story from Aveda’s point of view.

Sarah Kuhn is the author of Heroine Complex—the first in a series starring Asian American superheroines—for DAW Books. She also wrote The Ruby Equation for the comics anthology Fresh Romance and the romantic comedy novella One Con Glory, which earned praise from io9 and USA Today and is in development as a feature film. Her articles and essays on such topics as geek girl culture, comic book continuity, and Sailor Moon cosplay have appeared in Uncanny Magazine, Apex Magazine, AngryAsianMan.com, IGN.com, Back Stage, The Hollywood Reporter, StarTrek.com, Creative Screenwriting, and the Hugo-nominated anthology Chicks Dig Comics. In 2011, she was selected as a finalist for the CAPE (Coalition of Asian Pacifics in Entertainment) New Writers Award.

Disclaimer: this copy of the book was provided by the publisher (DAW) via NetGalley for this review, thank you!