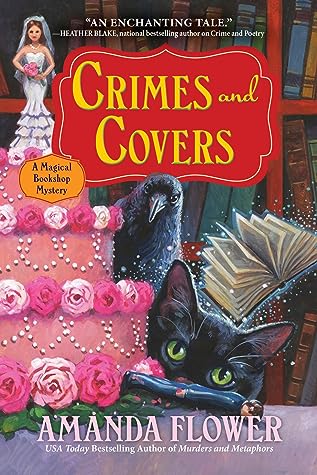 Christmas is coming to the Western New York village of Cascade Springs, and so is the long-awaited wedding of Charming Books proprietor Violet Waverly and police chief David Rainwater. Grandma Daisy and Violet's best friend, Sadie, go all out to make the nuptials the event of the season--whether Violet likes it or not. But the reception becomes memorable for all the wrong reasons when a woman's dead body floats by on the frigid Niagara River. Violet is shocked to recognize the deceased as a mysterious woman who visited Charming Books two days before the wedding, toting a rare first edition of Henry David Thoreau's Walden. Well aware that a mint condition copy could be worth more than $14,000, Violet told the woman she would have to have the book appraised before she could consider buying it. Most displeased, the woman tucked the precious tome under her arm and stormed out of the shop. Now she's dead, and an enigmatic message scrawled in pen upon her palm reads, "They stole my book." It's a confounding case, indeed. But fortunately, Violet can draw on the resources of her bookshop's magical consciousness, which communicates clues to Violet via quotes from Walden. With Emerson the tuxedo cat and Faulkner the crow at her side, Violet sets out to recover the priceless book by solving a murder most transcendental.

From the handful of cozy mysteries I’ve read this year, usually the story gives our intrepid sleuths some time to breath before—or at least during—their big wedding day. Not so in the case of Crimes and Covers by Amanda Flower. Amidst the wedding joy, an incident that first appeared to be an accident unfolded into a perplexing mystery concerning a signed first edition of Walden by Henry Thoreau.

There was a lot I liked about the story. The sleuthing aspects were good, considering how unusual the case initially appeared to be. I really didn’t know for a while, since the clues supported each scenario. Was it an accident? Or was it something more nefarious? With a book that was worth as much as the copy of Walden was, the list of possibilities was long.

Cascade Springs was yet another small town with a close-knit community. Since the story was set around Christmas, the setting was wintery, though I wouldn’t call this a holiday book. The holiday season was just in the background for much of the story. The focus remained on the mystery and books.

The characters were pretty good here too. I liked Violet’s determination to figure out what happened, as well as her sense of duty toward Charming Books and its tree. The shop was part of her family’s history, and with their care, the place developed an “essence.” I adored the magical aspects of the story, since it deviated a little from what I’ve come across before—with the bookstore being magical rather than Violet. Plus, there was a cat with a habit of escaping the store and a crow that liked to make literary quotes. I have to say that I enjoyed their antics, for the sometimes comedic moments that came from of it.

All-in-all, Crimes and Covers was a great story.

Amanda Flower, a USA Today bestselling and Agatha Award-winning mystery author, started her writing career in elementary school when she read a story she wrote to her sixth grade class and had the class in stitches with her description of being stuck on the top of a Ferris wheel. She knew at that moment she’d found her calling of making people laugh with her words. In addition to being an author, Amanda is librarian in Northeast Ohio.

Disclaimer: this copy of the book was provided by the publisher (Crooked Lane Books) via NetGalley for this review, thank you!