Meet Me by the Fountain: An Inside History of the Mall by Alexandra Lange 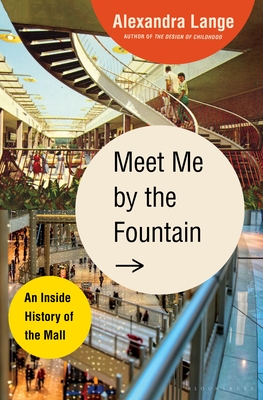 Few places have been as nostalgized, or as maligned, as malls. Since their birth in the 1950s, they have loomed large as temples of commerce, the agora of the suburbs. In their prime, they proved a powerful draw for creative thinkers such as Joan Didion, Ray Bradbury, and George Romero, who understood the mall's appeal as both critics and consumers. Yet today, amid the aftershocks of financial crises and a global pandemic, as well as the rise of online retail, the dystopian husk of an abandoned shopping center has become one of our era's defining images. Conventional wisdom holds that the mall is dead. But what was the mall, really? And have rumors of its demise been greatly exaggerated?

In her acclaimed The Design of Childhood, Alexandra Lange uncovered the histories of toys, classrooms, and playgrounds. She now turns her sharp eye to another subject we only think we know. She chronicles postwar architects' and merchants' invention of the mall, revealing how the design of these marketplaces played an integral role in their cultural ascent. In Lange's perceptive account, the mall becomes newly strange and rich with contradiction: Malls are environments of both freedom and exclusion--of consumerism, but also of community. Meet Me by the Fountain is a highly entertaining and evocative promenade through the mall's story of rise, fall, and ongoing reinvention, for readers of any generation.

When I saw Meet Me by the Fountain on offer for review, I thought “why not?” It seemed like a fascinating subject to delve into—it’s also far outside the nonfiction books I usually gravitate towards, but I went into it with an open mind. And I’m pleased to say that my initial assessment was right on the money. I loved the book.

Meet Me by the Fountain was an incredibly interesting look at the ways malls went from concept to reality; from cultural hubs to asserting more restrictions; and then into decline during something that can only be described as a boom-and-bust cycle. Lange expertly laid out the long history—well into more recent years too—in succinct and engrossing chapters. They delved into everything from layout, anchor stores, and the (often) narrow scope of who these places were meant to cater to. It was an interesting dichotomy between expectations and the actual needs of the community it was placed within—especially in urban areas.

There was a heavy emphasis on architecture and interior design throughout Meet Me by the Fountain. Many of the malls were described as using design to create an experience to entice shoppers to stay for longer periods of time.

I also appreciated the wide array of architects and development firms that were mentioned. Most of them I just never bothered to look up, but reading so many quotes about the process behind developing a project of the size of a mall was interesting. So there was a lot to learn from this book.

Meet Me by the Fountain is, hands down, one of my favorite nonfiction reads of 2022.

Alexandra Lange is a journalist and an architectural historian. She is a contributing editor at New York Magazine and writes articles about architecture, design and urban planning for Metropolis, Domino and The New York Times. She received her PhD from the Institute of Fine Arts at New York University and has contributed essays and articles to peer-reviewed publications such as the Journal of Design History and the Journal of the Society of Architectural Historians. Alexandra has taught architectural criticism at New York University and delivered papers on her research at the Society of Architectural Historians 59th Annual Meeting and the 2005 Buell Dissertation Colloquium at Columbia University.

Disclaimer: this copy of the book was provided by the publisher (Bloomsbury) in exchange for an honest review, thank you!

Email ThisBlogThis!Share to TwitterShare to FacebookShare to Pinterest
Labels: Alexandra Lange, ARC Review, Bloomsbury, five birdcages, Meet Me by the Fountain An Inside History of the Mall