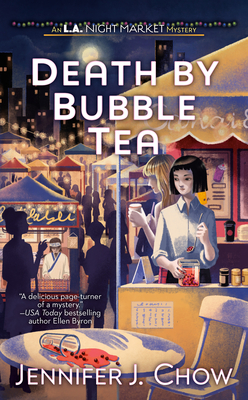 Two cousins who start a food stall at their local night market get a serving of murder in this first novel of a delicious new cozy mystery series by Jennifer J. Chow, author of Mimi Lee Gets a Clue.

When Yale Yee discovers her cousin Celine is visiting from Hong Kong, she is obliged to play tour guide to a relative she hasn't seen in twenty years. Not only that, but her father thinks it's a wonderful idea for them to bond by running a food stall together at the Eastwood Village Night Market. Yale hasn't cooked in years, and she hardly considers Celine's career as a social media influencer as adequate experience, but because she's just lost her job at her local bookstore, she feels she has no choice. Yale and Celine serve small dishes and refreshing drinks, and while business is slow, it eventually picks up thanks to Celine's surprisingly useful marketing ideas. They're quite shocked that their bubble tea, in particular, is a hit--literally--when one of their customers turns up dead. Yale and Celine are prime suspects due to the gold flakes that Celine added to the sweet drink as a garnish. Though the two cousins are polar opposites in every way, they must work together to find out what really happened to the victim or the only thing they'll be serving is time.

It’s been a minute since I last picked up a cozy mystery, but I was instantly intrigued by Jennifer J. Chow’s Death by Bubble Tea. Set in LA and featuring two cousins (Yale and Celine), the book had the look of a promising beginning to a new series. It met all my expectations.

Death by Bubble Tea was the perfect weekend read to get lost in. There was plenty of talk about food (which made me hungry while reading), and I liked the setting and the overall way the plot unfolded.
The characters, particularly Yale and her family, were developed well from basically page one, and I liked the sense of community that was established early on. The characters weren’t without their troubles, and that was explored alongside the other aspects of the story.

The mystery had a great introduction, and the portion of the story dedicated to sleuthing was relatively fun to follow along to. It was trial and error for Yale and Celine—something that was complicated by the fact that they were considered suspects where, theoretically, there should have been an ample amount of witnesses who had to have seen something. Untangling what happened that night was an interesting journey.

Death by Bubble Tea was a lot of fun. I will definitely check out the sequel.

Jennifer J. Chow is the Lefty Award-nominated author of the Sassy Cat Mysteries and the forthcoming L.A. Night Market Mysteries (Berkley/Penguin Random House). The first in the Sassy Cat series, Mimi Lee Gets A Clue, was selected as an Overdrive Recommended Read, a PopSugar Best Summer Beach Read, and one of BuzzFeed’s Top 5 Books by AAPI authors. Her upcoming Mimi Lee Cracks the Code was listed in BookRiot’s Best Upcoming Cozy Mysteries for the Second Half of 2021. She is the current Vice President of Sisters in Crime and is active in Crime Writers of Color and Mystery Writers of America.

Disclaimer: this copy of the book was provided by the publisher (Berkley Books) via NetGalley in exchange for an honest review, thank you!