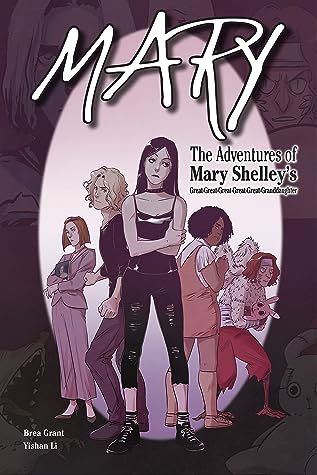 
Angsty teenager Mary Shelley is not interested in carrying on her family’s celebrated legacy of being a great writer, but she soon discovers that she has the not-so-celebrated (and super-secret) Shelley power to heal monsters, just like her famous ancestor, and those monsters are not going to let her ignore her true calling anytime soon.
The Shelley family history is filled with great writers: the original Mary Shelley, author of Frankenstein, the acclaimed mystery writer Tawny Shelley, cookbook maven Phyllis Shelley…the list goes on and on. But this Mary Shelley, named after her great-great-great-great-great grandmother, doesn’t want anything to do with that legacy. Then a strangely pale (and really cute) boy named Adam shows up and asks her to heal a wound he got under mysterious circumstances, and Mary learns something new about her family: the first Mary Shelley had the power to heal monsters, and Mary has it, too. Now the monsters won’t stop showing up, Mary can’t get her mother Tawny to leave her alone about writing something (anything!), she can’t tell her best friend Rhonda any of this, and all Mary wants is to pass biology.

The name Mary Shelley is a recognizable one. I haven’t read Frankenstein yet, but I have seen some of the many iteration’s of the titular character in other media. So I was drawn to this graphic novel, which imagines what the descendants of Shelley would be like with a notably paranormal edge. Mary was a fun read. There was a lot I liked about the story, and overall it was good.

I liked the art style. The characters had a very unique look to them, and the setting was done quite beautifully. Though if you have read a lot of young adult novels, especially on the paranormal side, you will recognize a lot of the tropes used here. They were used effectively, and the end result was an enjoyable story perfect for October.

One of the highlights was the character, Mary, who didn’t seem to quite fit in with the rest of her family—who were all writers, whether it be for cookbooks, memoirs, or fiction. In many ways, her issues of feeling pressured by her family to follow in their footsteps—and feeling unsure of what she really wanted to do—felt very real. I can also say the same about the rest of her family. They meant well, but they could come across as overbearing. Still I liked how those themes—namely family and coming-of-age—were handled. I do have to note that Mary’s powers were extremely easy for her to master. There didn’t seem to be much effort at all, just some hesitation on her part.

That being said, I really enjoyed Mary. If there’s ever a sequel for it, I will likely read it.

About the author...
Brea Grant is a filmmaker/writer best known for co-writing/directing the apocalyptic feature, Best Friends Forever, and acting on shows like Heroes and Dexter and features like Halloween II and Dead Night. She has co-written two comic series: We Will Bury You, a 1920s zombie series, and The Suicide Girls, based on the popular website. She also wrote a short story for the collection Zombies vs Robots: This Means War! She wrote and created the series, The Real Housewives of Horror for Nerdist and most recently wrote and directed an episode of the Netflix show, EastSiders. As if she’s not busy enough, she also co-hosts a weekly podcast called Reading Glasses on the Maximum Fun network. You can currently see her award-winning short Feminist Campfire Stories on Funny or Die and her acting work on the series The Arrangement. She wrote and will star in a feminist slasher called Lucky later this year. In her spare time, she enjoys reading science fiction and watching too much TV while pretending like it's research.

Disclaimer: this copy of the book was provided by the publisher (Six Foot Press) via Netgalley for this review, thank you!