Review: The Case Study of Vanitas volume 5 by Jun Mochizuki 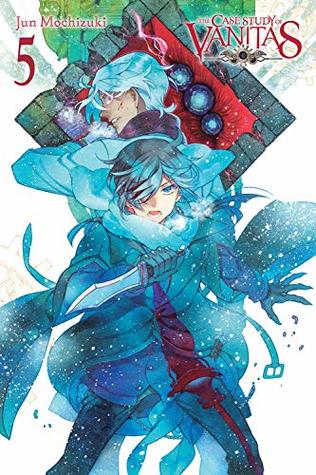 Long ago, France was terrorized by The Beast of Gévaudan, who indiscriminately murdered hundreds. Before the creature could be stopped, the Beast vanished into thin air. Now, on the streets of nineteenth century Paris, news breaks of the Beast's gruesome return. As Noé and Vanitas rush to learn more about the Beast and its connection to vampirekind, none other than the Holy Knight, Astolfo, and Jeanne, the Hellfire Witch, stand in their way...

I’m steadily working my way through the current volumes of The Case Study of Vanitas. I’m on to number five, and it is a bit of a departure from the calmer chapters at the end of the previous volume. I guess you could say that it was the calm before the storm. The story takes on a darker tone, as the plot takes the main characters out of Paris. A lot of backstory is revealed for characters like Noe. There was even a little more about Jeanne (the Hellfire Witch), as some of her backstory is revealed through the exploration of her connection to the beast stalking Gévaudan.

The events of volume five once again demonstrated the murky morality in play with the characters of the series. Most of them are secretive and morally ambiguous, and so the lines between right and wrong are often blurred. It’s one of the strong suits of The Case Study of Vanitas. They’re characters you can care about and get invested in, who sometimes mean well, who think they’re doing right—and sometimes have the justification for it—but their secrets, motivations, and methods by which they get to that conclusion makes for situations that rarely have simple explanations or solutions.

There was plenty of action and mystery in this volume, which I greatly enjoyed. I also liked how Mochizuki incorporated real-world influences here. Such as how the Beast of Gévaudan was incorporated into the story so that it fit with the overall lore established in previous volumes—and as I was reading I thought the name sounded somewhat familiar, so I did google it.

Overall, this was another great volume, and I’m looking forward to the next one.